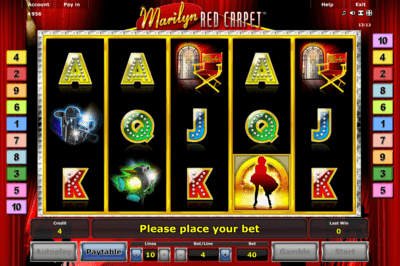 Marilyn – Red Carpet is one of several top Marilyn Monroe themed video slots which are doing the rounds on the internet. This particular title is one of Novomatic ’s slots, and one of the more superior titles in this genre. Played over a typical 5 reels and 10 paylines, the Marilyn – Red Carpet slot is not one of their most successful titles, though perhaps it should be. Even so, players can choose minimum and maximum wagers which fluctuate from 4p per spin (and that’s just for a single line), up to £100 per spin on this slot. Marilyn – Red Carpet does come fully booted with a non-progressive jackpot which is worth 10,000 coins in all, although it is hardly enough given the rather sizeable minimum stake. Remember, if you wish to play on the cheapest bet with all of the paylines, you’re looking at 40p a spin, which is quite costly.
Special Features

There is a joker icon in this slot machine game. If players can land the wild symbol on the reels of this game, they will have located a substitute symbol. As a joker (wild), this icon can replace all other symbols in the slot, save for scatters. Wilds do not have any monetary value of their own to offer you, though. Wilds take the shape of the famous skirt-blowing Marilyn scene, as a silhouette.

Scatter icons appear as Marilyn Monroe herself, and can offer you scattered wins worth double your total stake when 2 of them appear anywhere on the screen. Scatters only appear on two reels of this slot, which is strange. Land two of them and you will trigger the Marilyn Bonus.

This free spins bonus is far more entertaining than in other Novomatic slots, and gives Marilyn – Red Carpet an added sense of excitement.