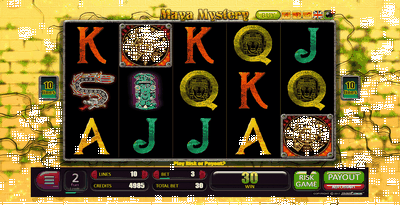 Throughout history, different civilizations have built different types of structures that have stood the test of time, and the Mayan pyramids are a great example of that. The Maya Mystery bonus is based on these big structures, and Belatra Games has done an excellent job with bringing all of the mystery and treasure hunting excitement to the reels. This is a medium-volatility slot with some high-end payouts but a reasonable level of balance across the rest of the pay table, and that helps it to appeal to people who like different styles of play because it’s not extreme in either direction on the volatility spectrum.
Game Format

The format of this game has 10 paylines, which gives it a distinct feel that you don’t get from titles that have a lot more ways to win on each spin. There are five reels and three rows of symbols, and the lines pay from left to right only. You can wager from one credit to 200 credits per spin, and that puts the maximum bet value per turn at 2,000 credits. The available credit sizes will depend on where you’re playing from. All of the payouts that we describe below are based on multiples of the bet per line, and that includes the scatter symbol wins as well.

One of the things that gives this game so much flavor is the fact that the wild symbol is also a scatter. This means that its own payouts are determined by how many of them show up on the reels, but they also help players to get other payouts based on where they fall in relation to other symbols on the paylines.

Five of a kind of this wild scatter located anywhere on the game’s reels will pay out 2,000x. You can pick up 200x for four of a kind, and players will earn 20x for three as well. If you get sets of wilds on a given paylines, however, then you’ll get that regular payline win as well, so you can actually get payline-based wins for these wilds based on their value for the pyramid symbol’s pays because that’s the highest-paying regular symbol in this slot.

When you get three or more of the scattered wild, no matter where they appear, you’ll get a shot at a free spins bonus feature with 10 free shots at payouts. You can re-trigger this feature to add 10 more free turns over and over again up to a total of 150 free spins at a time.

During these free spins, you’ll randomly pick one of the regular-paying symbols to become a super symbol. During this bonus feature, the super symbol will give you payouts regardless of where they show up on a payline. That’s a fun way to add some value, and it’s not something we can remember having seen much of before.

Major Payouts and Other Wins

Five of the Mayan statue or the yellow A symbol will earn you a 150x win. The red K, golden Q and green J are all worth the same payout of 100x for five on a payline. This pay table is top-heavy, but there are small and medium wins that are pretty reasonable as well.

If you’ve been playing slots for a while, you know that there have been a ton of games based on Egyptian pyramids, but there haven’t been that many based on pyramids found in other parts of the world. Belatra Games’ Maya Mystery bonus gets some credit here for using a theme that hasn’t been used quite as much, but they also get credit for the cool mix of different types of features they’ve used for this title. This includes the combination wild/scatter and the super symbols in the free spins mode. If you like games with a bit of action, and you don’t mind a little bit of volatility, then this is one that you should check out.