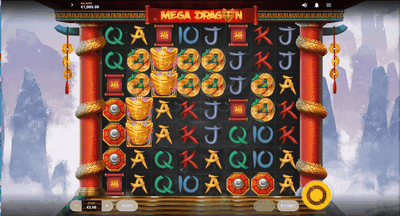 There’s a traditional feel to the design here which is very nicely done. Set against a mist-shrouded, mountain backdrop, the reels are set within a traditional pagoda-style building. There you’ll find A to 10 royal values as well as a banner, a pearl ornament and a set of 3 coins. The best-paying symbol is the golden pot. Land a cluster of 25 or more of these in combination and you’ll pocket an award of 888 coins.
After a winning combination is created, the successful symbols are removed and new ones drop in and replace them. The symbol drops keep on coming as long as a new winner is created. Central to the action here is the golden dragon head wild. This substitutes for all of the standard symbols. Land 2 wilds adjacent to each other and you’ll trigger 1 of the 3 dragon-inspired extras.

Green Dragon feature – this clones 1 of the lower value royal values and turns it into 1 of the higher paying symbols. A new payout calculation then follows.
Golden Dragon feature – here the Golden Dragon adds a random selection of extra wilds into play. Again, a new payout consideration is made with the extra wilds in position.
Red Dragon feature – the Red Dragon flies across the reels and chooses 1 of the higher paying symbols. That symbol is then expanded and turned into a 2×2 mega tile (or sometimes even bigger). Land more than 1 of these in the same combination and the coins can quickly build.

You’ll see that there aren’t any free spins here. The symbols drop game engine keeps things moving along though and the Dragon extras come along very regularly so we barely missed the free spins. It’s possible to land multiple dragon extras from the same set of symbol drops which can deliver some excellent combinations. You can win up to 3,888 times your total stake on each spin which is impressive.

The imagery in Mega Dragon slot is well put together and the traditional backing track is a good fit. Put that together with the fast-paced gameplay and Mega Dragon is a very playable take on this classic theme. If you like dragons, Red Tiger Gaming’s Dragon’s Luck is recommended as to are these other dragon themed slots.