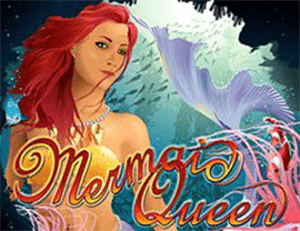 The World is Your Oyster

The low-value symbols in this game are J, Q, K and A. Meanwhile, the higher-value symbols in this online slot machine are represented by the items from the sea. You’ll find the pearl peeking out from within an oyster shell, a galleon, a spyglass with some gold coins to the side, a chest overflowing with treasure and some leaping dolphins. The scatter symbol is the lovely mermaid. Should you land 3, 4 or 5 of them anywhere on the reels, you’ll make it to a free spins feature with 15 extra rounds. The dashing pirate broods on the reels, making him – appropriately – the wild card.

When searching for this Mermaid Queen slot games in online casinos, you might be confused on two different levels. Firstly, this is not the only one of its name. Software developer RTG had already released its own Mermaid Queen, so this will likely be the first one you come across when hunting down the aquatic beauty.

The second area of confusion may arise in that Barcrest comes under the banner of SG Gaming, a division of Scientific Games. Based in the UK, Barcrest started out in the swinging 1960s with the classic fruit machines of the day. International Game Technology then bought Barcrest in the 1990s, followed by Scientific Games in 2011, and it was during this period that the online casino market began to really take off.

A Slot Fit for a Queen

Mermaid Queen’s theoretical return to player is 95%, with a medium-to-high level of volatility. So, your chances of a payout are relatively good, but a lot will depend on whether you make it to that free spins round. Entry to this is gained by landing at least 3 of the finned lady on an active payline.

In the free spins round, all your wins will be multiplied by 3, and once you’ve had your first payout you can choose to play the gamble feature. Hit the gamble button and risk your winnings to double – or lose – the lot via a red or black card guessing round. It’s 50/50, so it’s not too taxing a choice right back to square one.

The Ross Poldark-styled pirate wild is a big help too, substituting for other symbols to help ease you into more winning combinations. Be aware that only the highest win on each line is paid, though. After the mermaid and pirate, the dolphins and galleon ship are the highest-paying icons. These are followed by the treasure chest, the spyglass, the oyster, and lastly the A, K, Q, J, 10 playing card symbols and their poor relative – the number 9, which garners a payout of just 0.

There’s certainly no shortage of mermaids and ocean-based games on the market to keep you entertained. So, if you just love some underwater escapism, you’re in luck. Your first port of call if you’d like to test out some others might be the other Mermaid Queen. That version features software by RTG and differs from Barcrest’s slot in that it has 20 paylines and a theoretical RTP of between 91 and 97% (this will depend on your gameplay choices). The animation style is quite different too, with more of a cartoon-drawn Little Mermaid vibe. With a medium level of variance, this Mermaid Queen casino slots also has a jackpot tier, free spins (10) and 2x and 3x free spin win multipliers.

If you’d prefer something with different characteristics while having the same sort of theme, Play’n GO’s 2017 release, try the Mermaid’s Diamonds video slot. It has similarly clear and immersive graphics, but features 720 ways to win with a honeycomb reel design. The slot is visually stunning, making you feel like you’re actually in the mermaid’s home. The sound too adds dramatic atmosphere as you play to win up to 5000x your stake. Random wilds can be added to the reels at any time to aid those winning combinations, plus there are 25 free spins up for grabs in a treasure chest picking round.

If you prefer slots with a low betting limit, then this is for you. Begin playing the Mermaid Queen casino slots slot machine from as little as 0. As such, it’s likely to appeal to a wide range of players, from those who prefer to play it safe to the bigger spenders. Newbie gamblers will relish the simplicity, especially the small number of paylines, making it really easy to keep track of everything that’s going on.

In terms of features, it’s pretty standard fare and doesn’t offer anything especially unique or out of the ordinary. However, it’s nicely designed, user-friendly, and straightforward to play. What’s more, the theoretical payout percentage seems to make it a good bet. If you’re a fan of all these mythical, ethereal beauties, then you’ll most likely lap up this water-themed slot.