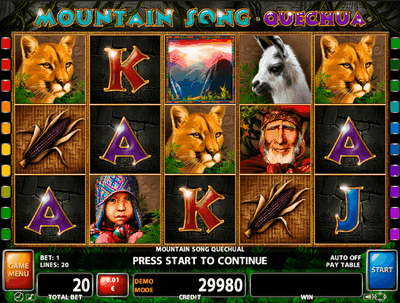 There is something magical about the music created by the Incas. Mountain Song Quechua bonus is an online slot game by Casino Technology was inspired by this music. Besides the great story, this slot also has nice graphics and some bonuses and features too.
Graphics & Theme

The Incan empire was a great empire that existed for hundreds of years. Besides their military power, they were known as great artists and music were one of their favorite pastimes. Visually, this online slot game looks excellent. The earthy, neutral colors are found all over the reels. The cartoon-like symbols look quite realistic.

Mountain Song Quechua is played on 5 reels and 20 paylines. On the reels, players will notice a few different basic symbols including playing card symbols from Jack to Ace, a dark corn, an ordinary corn, an old man, a mountain lion, a llama and an Incan kid. When you receive three or more matching basic symbols on a line, you can expect a prize.

The Incan man playing an instrument is the wild symbol of this slot game. This means that it has an ability to replace any missing basic symbols from a winning combination. The second special symbol in Mountain Song Quechua mobile slot is the view of the mountain.

This is the Scatter symbol which appears only on the second, third and fourth reel. When it does, it triggers 15 Free Spins.

Mountain Song Quechua is a great online slot game with a nice story.