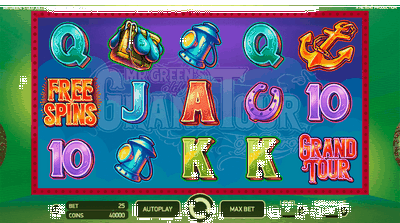 Mr. Green’s Old Jolly Grand Tour is a reel-spinning, real-money, betting adventure developed by NetEnt exclusively for Mr Green Casino customers. As the marvelous Mr. Green is a wealthy European, the slot reels depict his Grand Tour of important cities in Europe by way of land, air, and sea expeditions.

In this 5-reel, 25 fixed-paylines betting game, the Grand Tour signage is the highest paying symbol. The icon awards 50, 100, or as many as 500 coin credits whenever 3, 4, or 5 of such symbols line up as matched groupings in any payline.

Mr. Green’s Old Jolly Grand Tour though seems to have transpired during an earlier era, as suggested by dated images of other high-paying icons, such as the Anchor, the Leather Satchel, the Lantern, and the Horseshoe totems. Aside from those symbols, the background illustrations include moving images of a locomotive, a horse-drawn carriage, a steamship, and a hot air balloon.

A tile with an illustration of a Compass Star and labeled as WILD represents the joker card of this slot game. It emerges only in Reels 2, 3, and/or 4, and can be used as alternative symbol to complete a payline combination. Players can look forward to awesome winning events, because the Compass Star Wild has additional win-boosting elements aside from its substitution functionality.

Branded by NetEnt as a Multi Wild, a base game Wild Symbol emerging as outcome of a spin will flip over to reveal any of the following special features:

The Expanding Wild attribute, which enables a single-tile WILD emblem to enlarge and become a full-reel, 3-tile high totem.

The 2x Wild doubles the win amount of payline matched-groupings that the Wild Symbol helped complete. If more than one Wild icon flips and reveals a 2x Multiplier, the factors will likewise multiply to bring greater Wild-completed winnings. It is possible to land on an outcome with three Multi-Wilds in place across the three designated reels. That being the case, a lucky slot player experiencing such an event will receive eightfold ( 2x = 8x) of payouts for Wild-completed payline wins.

Landing on three (3), four (4), or five (5) Free-Spins icons correspondingly triggers 10, 20, or 30 bonus spins. The set of bet-free spins will be played in bonus reels enhanced with more Multi-Wild Symbols. This denotes that more than one Multi-Wild may come around as outcomes of a bonus spin.

The greater significance of the bonus reel enhancement is that Bonus Game Multi-Wilds occurring in multiple after a single free-spin, could arbitrarily activate a combination of all special Wild win-boosting attributes.