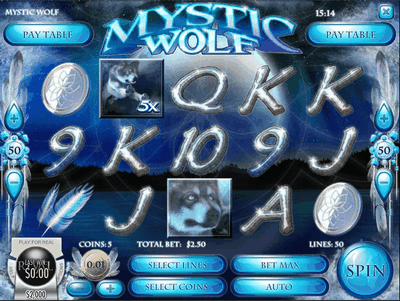 Mystic Wolf online slot is a 50 payline, 5 reel non-progressive jackpot slots brought to you by Rival. I like the game’s mystical theme since it reminds me of the native Americans reverence for the wolf. The game is laced with scatters, wilds, two bonus games and an average return of 95%. The jackpot payout is 5,000 coins. The slots machine also comes with an Auto Play feature.
The developers of the game added additional touches like feathers around the coin and whilst the reels are spinning falling stars come tumbling down. Observant players will note that falling stars are normally associated with luck. Hopefully you’ll have loads of it during the game.

Symbols that feature across the reels are the Mystic Wolf, the running wolf wild symbol, diamond, coin, silver moon, feather and card symbols from 10 to ace.

The coin denomination ranges from . Up to 10 coins can be wagered per payline. The random jackpot could be won during the Mystic World Super round or during the base game. The game is suitable to low and high staked players. Before you play it’s important to select the coin betting range that suits your bankroll best.

A winning payline is formed when the Running Wolf Wild slot symbol substitutes any symbol. During the base game it pays up to 5x and during the Mystic Wolf slot review Super round as much as 10x.

The wild symbol is the Running Wolf. When it appears in a winning combination it substitutes all the other symbols except the scatter symbol. During the base game the multiplier increases wins up to 5x.

This is where it becomes even more interesting. As the game unfolds the more I liked it. Reason being it contains an additional bonus round known as the Lunar Phase Bonus Round. This round is triggered when three lunar dice appear any place on the reels. To win additional coins you must try and match 3 Lunar Phases to the Lunar Dice.

Fans of the Twilight movies will really enjoy this slots. My initial impression of the game was that it appeared a bit ”bland”. But as I started playing it I really warmed to it. Aside from its mystical theme, it’s the additional bonus rounds that roped me in.

If you’re lucky enough to unlock them you can win up to 50 free spins. I guess this feature alone is enough to get players playing. Just keep in mind that the return to the house is 5%. You might experience a few dry spins before you land a couple of good wins.