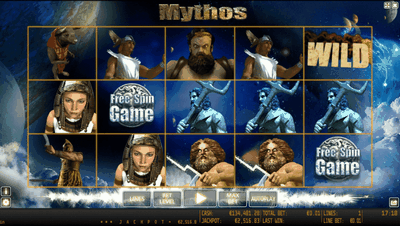 Mythos – a mythical slot with a modern jackpot
The gods and goddesses of Greek mythology are your passport to riches in Mythos, the free slots game from World Match. Part of the developer’s HD portfolio, Mythos casino slots looks equally stunning in the iOS and Android versions for tablets and mobiles. With five reels, 25 paylines, seven bet levels and stakes from 0. Mythos offers a maximum stake of 25 coins and a top payout of a 2,500 x multiplier. There is also World Match’s famed attention to detail in the paytable symbols and gaming experience.

Jupiter, the Roman king of the gods, was known in Greek mythology as Zeus
Mythos, offering a 250 x multiplier for five symbols. Joining him on the paytable are various other figures from Greek mythology. Poseidon brandishing his trident and the mythical half-man, half-bull Minotaur pay up to 75 x. The next most valuable symbols are Hermes, the messenger of the Gods, and the Greek warrior, who both have a top prize of 100 x your bet. Athena, daughter of Zeus and goddess of wisdom, rewards you with 125 x your stake for five across the reels. Ares the bloodthirsty Greek god of war carries the biggest prize of all the mythical figures, offering a massive 1,000 x for a full house.

The gods are angry

Spin up a winning combination and all the symbols will animate – watch out for Zeus throwing his lightning bolt! The top paying symbol is the sacred fire, which was expected to burn on the altar in every Greek home. This pays out a whopping 2,500 x your line bet or 2,500 coins if you are playing the maximum stake.

The wild symbol, hewn from stone and floating on fire, substitutes for any other symbol to produce winning combinations. The free spins bonus is represented by a hefty stone tablet carved with an image of the fearsome snake-headed Medusa, who could turn you to stone with just a glance. Land three or more of these symbols anywhere on your reels and you will be taken to the free spins game. The music starts to pound as Medusa’s head spins – where will her deadly gaze land? If she is kind, she will reward you with a massive 100 free spins. These pay out at the bet level and for the same number of lines that were set when the feature triggered.

Be the god of your game

World Match is renowned for allowing players to customize their gaming experience, with Mythos slot machine no different. Choose autoplay to sit back and really become absorbed in the game’s atmosphere, while fast spin will cram in the maximum amount of gaming possible if you are pushed for time. If you are clever enough to spot an upcoming combination, use spin stop to halt the reels. With Mythos your destiny really is in your own hands and you will want to battle the gods time and again for those valuable free spins.