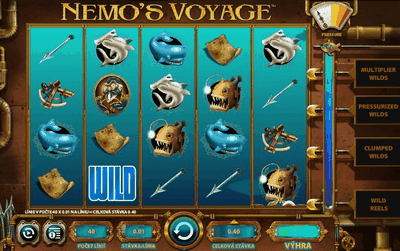 Nemo’s Voyage is a WMS-powered slot machine that takes you 20,000 leagues under the sea. Inspired by the classic science fiction adventure novel by Jules Verne, the slot uses a 5×4 layout and 40 paylines. The game benefits from even 9 different special symbols and most of them are Wilds which are added to the reels during bonus features.
In this entertaining game, high-value icons are delivered by icons depicted as the giant squid holding the Nautilus with its tentacles, diver with a helmet and Captain Nemo himself whereas other positions are filled with deep sea creatures like anglerfish, whales, hammerhead sharks and the equipment like telescopes, maps and harpoons.

On the right-hand side of the reels you will notice the meter with the indicator that moves down on each spin during the descent of the Nautilus. When the Nautilus passes a lock, the Wild feature is initiated until another lock is reached. You can activate Multiplier Wilds, Pressurised Wilds, Clumped Wilds or Wild Reels thanks to this feature.

When Multiplier Wilds are activated, all Wilds appear with a 2x or 3x multiplier attached to them and increase your payouts respectively. When two or more Multiplier Wilds complete a winning combo, they are added together. Pressurised Wilds will replace all symbols below them with Pressure or expanding Wilds while Clumped Wilds are added to adjacent positions on the reels 2 to 5. When Wild Reels are triggered, up to 3 reels will go Wild on each spin. All Wilds can appear on the reels 2, 3, 4 and 5 only.

Above the depth meter you will also notice a pressure gauge that moves the needle one tick to the right when the Increase Pressure symbol appears. When the needle moves to the red section of the gauge, the Nautilus stops descending and the next time the Increase Pressure icons lands on the reels, the Nautilus will start ascending at a steady rate until it reaches a lock.

The Bonus symbol shows up only on the reels 1, 3 and 5 and once three of these hit the reels, the free spins feature is triggered. You will get 8 free spins during which the giant squid will rip off a number of random symbols with its tentacles and replace them with so-called Persisting Wilds. These sticky Wilds will stay in their positions for the entirety of the feature which cannot be re-triggered. The Nautilus does not ascend or descend during free games.

As you can see, there’s plenty going on in the Nemo’s Voyage slot and though it may seem a bit complicated, the game plays smoothly and looks great. The top paying symbol is the giant squid and landing 5 of these on a payline pays 300 coins. This may seem as a mediocre payout, but thanks to multiple Wilds appearing on the reels, you will easily create multiple winning combinations at once. In addition, some of them carry multipliers that can double or triple your winnings. The maximum possible win you can hit in a single spin during the base game stands at 12,000 coins.

Nemo’s Voyage boasts exquisite graphics and a dramatic music score that fulfils the atmosphere of the game full of anticipation. All the symbols appearing on the reels are theme related with no playing cards in view. The deeper you dive, the higher the odds of winning, so once you reach the bottom of the sea, the RTP increases from 95. We highly recommend diving with Captain Nemo and this highly entertaining release coming from the WMS creative kitchen as you can score some hefty payouts thanks to different Wilds completing your combinations.