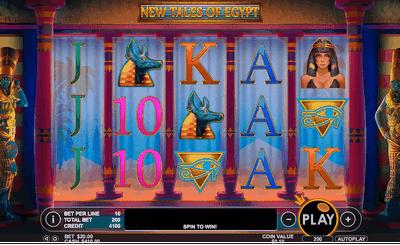 New Tales of Egypt might claim that they’re new, but in actuality you’re getting the same old Ancient Egypt theme that you’ve seen in dozens of other games, if they’re not in the hundreds by now. The images shown among the symbols are the same as well, with maybe one difference, the fact that you can see Cleopatra’s cleavage in her symbol. Is that enough to make an Ancient Egypt title attractive and fun? I’ll let you decide on that one. As for the features, which can make a game exciting, New Tales of Egypt will have the wild symbols in place, along with the scattered Pyramids and with free spins that will have multipliers. The slot pays up to ,000, and it gives us 5 reels with 20 pay lines.

The bets that are used will include anywhere between 20 and 200 coins in them. With the values ranging from . Each of the 20 active lines get bets of up to in this case. It’s the betting system that we always see from Pragmatic Play, the part that changes being how many fixed lines are included. It’s 20 in this case.

As I’ve said, Pragmatic Play didn’t show a lot of imagination in New Tales of Egypt. Ancient Egypt themed games are among the top 3 most overused topics for slot machines, right up there with fruits and leprechauns. You don’t even get some kind of special angle here. The action takes place inside a pyramid or temple, you see a couple of statues to the sides, and symbols which are either poker cards that look very simple, or Ancient Egypt symbols or gods. For the symbols of the game, they offered diamonds (the wild), pyramids (scatters), and four regular symbols (Cleopatra showing cleavage, Eye of Ra, Anubis and Bast). The five lowest paying symbols are the Royals ranging from a 10 to an Ace. Neither the quality of the design, nor the theme, recommend this game as a must play title. It’s something that you can get from plenty of other slot machines, so it will be difficult to find something exciting in this one.

You might not find a lot of interesting things in the design of New Tales of Egypt, but at least the features are off to a good start. You’re going to find two different symbols acting as wilds in the game, and one of them is a scatter at the same time. The simpler of the two wilds, the one that shows us a rotating diamond, is the one that’s expected to form the best paying combinations, offering as much as 1,000x when this happens with enough symbols. As in every other game, the wild is useful if combined with properly positioned matching symbols, forming combinations with them, but it doesn’t do any good when you need more scatters on the reels. The second symbol that can act as a wild, the Pyramid, can also be used as a scatter. As a wild symbol, you’re going to use it to replace all other symbols, provided that it lands where you need it, and the others on the same line are regular symbols of the same type. As for the scatter role of the Pyramid, it can be used to deliver to you free spins, no matter where the symbols are appearing. You get a payout which is the equivalent of 2x, 20x or 200x the wager of the round, for 3, 4 or 5 symbols in view. Up to 10 free spins can be triggered as well, through a special feature that is called Queen’s Chambers. To get inside the chambers of this attractive queen, you need to land 3 or more Pyramids scattered on the reels. One of the high paying symbols will be picked to behave as a scatter, for the duration of the free spins. You can retrigger the free spins an unlimited number of times, they didn’t place any limits on the feature.

The payouts expected from regular combinations will reach 1,000x at most, so you can get ,000 from those. The scatter symbols appear to be a lot more interesting, offering a 200x the wager reward, which can be turned into ,000 cash. An average RTP of 91. It’s below the average for an online slot, though if you’re coming from brick and mortar casinos it might sound good to you.

After looking at every single aspect of the game, from its theme, its graphics quality, the features that are offered and especially at the average Return to Player percentage, I’d say that New Tales of Egypt doesn’t give us a single good reason to play it in the long run. It’s one of the games I’d recommend you stay away from, as there are better games for you to use your money on.