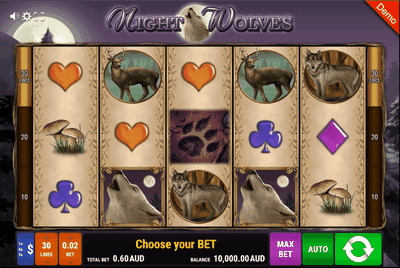 Head to the North American wilderness in Night Wolves, a nature-themed slot from Bally Wulff. Played using a 5 reel, 10 to 30 payline game engine, it comes with a bonus feature where your winning chances are boosted by the addition of multiple stacked wilds. Play on all devices from between 10 to 30p and £20 to £60 per spin.
The visuals in Night Wolves mobile slot re recognisably from Bally Wulff – set against the moonlit night sky, the reels include lower value playing card suits alongside a selection of nature inspired symbols. In ascending order of value, look out for pine combs and toadstools which can pay over 13 times your total stake and the deer and wolf which award up to 20 times your bet.

The most rewarding standard symbol is the howling wolf – it spins fully stacked. You can land winning combinations that include the wolf from right to left as well as the usual left to right formation.

There’s also a wild, the paw print, which replaces all other symbols apart from the scatter. The full moon scene is that scatter – land 3, 4 or 5 of them anywhere on the screen on the same spin and you’ll pocket 3, 15 or 30 times your total stake. You’ll also trigger the Free Games feature.

Once the feature is active, you’ll be awarded a dozen free spins (this is the same regardless of how many scatters you hit). Boosting your winning chances here are extra wilds. That’s not all as stacked wilds will be in play too. You can re-trigger more free spins here by landing three or more scatters.

Night Wolves online is a simple game – the visuals aren’t especially flashy but are acceptable enough. Likewise, the guitar heavy soundtrack that conjures up a feel of rural Americana. The only feature is the free spins round. It’s not especially innovative but the potential on offer from the stacked wilds keeps things interesting.

In fact, you could say that about Night Wolves as a whole – it’s not a real eye catcher but what it does, it does well. Get lucky with the stacked wilds in the free spins round and the Night Wolves could get you howling with delight. If you like wolves, tackle werewolves in the volatile Full Moon Fortunes by Ash Gaming.