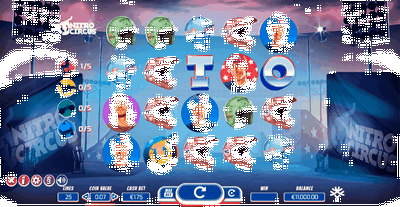 If you’re into extreme sports, you’re probably already familiar with Nitro Circus. A travelling band of incredibly talented athletes performing death defying extreme sports around the world, the Travis Pastrana-led group lend their name and image to this slot from the team at Yggdrasil Gaming. It’s a slot that tries hard to keep up with the pace and intensity of the Nitro Circus slot review crew, blending some cool extra features and mini-games with some good win potential.
Yggdrasil have a track record for producing slots with stunning graphics such as Lucky Neko and Multifly, and that’s equally true in Nitro Circus. There are symbols based on members of the Circus, as well as a variety of different helmets in different styles and colours, spanning the reel set.

The main game takes place on reels against a backdrop of stunt arena, so you immediately feel like you’re in the middle of the action. Keep an eye out for some of the jumps and tricks going on in the background as you play through the game!

The betting starts at £0. The jackpot win stands at 500x, so it’s not too hard to see how this can mount up into a significant win in the case of max spins.

As if that wasn’t enough to mark this out as a high paying slot, the RTP percentage stands at an incredible 97. Anything 95.

Throughout the game, there are a number of different bonus features and added extras, designed to give you more opportunity to win through feature rounds.

The wild symbol in Nitro Circus mobile slot is the golden WILD, which appears anywhere on the reels. This substitutes all symbols other than the letter symbols and the bomb scatters. Wilds fill in the gaps you’re missing to complete payline combinations, or extend combinations to make them more valuable in some cases. As such, you want to see as many wilds as you can, ideally as close to the left of the reels as possible, to be in with the best chance of landing a wild combo win.

The bomb is the scatter symbol. Landing two of these is sufficient to trigger the Nitro Blast Mini game, where you have the chance to win either vehicle tokens, added wilds or up to 30 free spins. Not bad for landing any two – but if you land three or more, you’re into the full bonus feature.

There are also letter symbols that appear, spelling out the word NITRO. These are treated like a scatter, though you need to line them up across reels 1 to 5 in order to trigger an associated jump bonus.

Spell out the word NITRO using the letter symbols and you get to perform jumps to add multipliers to your game, activating faster and better vehicles as you go. It’s a great feature if you’re a fan of Nitro Circus slot machine and the stuff they do, but also a good way of ensuring bigger spin wins through the multiplier.

Nitro Circus is a must for fans of the group. But even if you’re not especially familiar with living life to the extreme, there’s enough in this game in terms of high quality gameplay to make it well worth a few spins of your time.