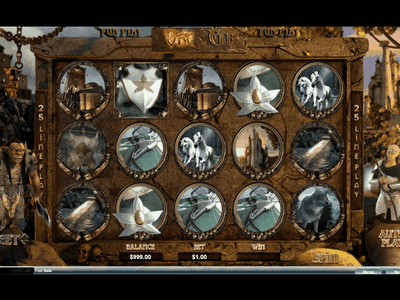 There are some lifelong rivalries that people have simply accepted as a fact of life. Dogs and cats. Jocks and nerds. The entire collective human race and people who park where they shouldn’t and give everyone road rage. And while all of these are perfectly valid and understandable reasons for eternal war, none are as embroiled in eternal conflict for control and dominance as orcs and elves. If you can find a fantasy setting, you can probably find some type of orc and elf fighting over one thing or another.
Screenshots

Of course, such a conflict can be of varying scales of awesomeness, but it doesn’t seem like RTG pulled any stops here. You command entire orcish hordes into battle, and on the other side, you fight alongside the Elven King himself in order to beat back the invading savages who wish to take your land from you.

Indeed, RTG’s Orc vs Elf captures the conflict perfectly. Choose your champion, and do so carefully, as you cannot switch it without reloading the game. Your choice of champion affects that features you will have access to later on. The game was originally released in 2013, and has held up surprisingly well. It has two mascots moving about on the sides of the reels, and they end up fighting one another when one of the bonuses activates. The title has a medium volatility, meaning gamblers will have a nice balance between frequent but small pays, and rare but massive jackpots.

Orc vs Elf is played on a 5×3 playing field with 25 fixed paylines. RTG has not released any information on the title’s RTP, so we can’t say for sure what sort of returns you can expect. Gamblers cannot change the amount of active paylines – instead, they can only adjust the total bet by increasing or decreasing the coin value, allowing them to set wagers between .

The Autoplay option is rather expansive. Gamblers can set if they want to use Turbo speed during said spins, as well as being able to set the amount of automatic spins to be played. Additional options include setting a single win threshold, as well as a win or loss limit, which, if broken, stop the Autoplay entirely. Gamblers can also choose to stop Autoplay if a jackpot is hit, if any win is won, or if one of the features is activated.

Payouts for all symbols are awarded when three or more of them follow one of the twenty-five fixed paylines, going from left to right. Certain higher paying icons require only two icons to reward minor wins. The highest paying symbols are the fortresses of the two races, followed by their racial mounts, (wolves and unicorns), then a war-banner and a flower, a pile of skulls and a potion, and finally, a steel sword and a well maintained bow as the lowest paying symbols.

Shields at the Ready! Seven Different Features Per Race!

Depending on which race you pick, you will have access to seven different racial features. Both bonuses are triggered by collecting three or more of that race’s shield Scatters. All of the racial features are upgrades of the previous tier, and so we will present them in a list for your reading ease.

Goblin’s Gold – Five free spins, during which all Darkling symbols pay double. Hobgoblin – Same as Goblin’s Gold, but has six free spins. Two Scatters reward an extra free spin. Orc Army – Same as Hobgoblin, but Orc Forts become extra Wild if the Orc appears on the reels. Orc Horde – Same as Orc Army, but an extra orc appears on the first reel. Giant Spins – Same as Orc Horde, but the pays of Darkling symbols are tripled. Chaos Spins – Same as Giant Spins, but seven free spins are rewarded initially. Orc Onslaught – Same as Chaos Spins, but the last spin is a Superspin, with a guaranteed orc symbol covering the first reel.

Elf Magic – Same as Woodland Spins, but an extra Wild will appear on reels two, three and four after each spin. Huntsman – Same as Elf Magic, but players get seven free spins and the elf symbol will kill any orcs appearing in the first reel. This rewards a 200x bet prize. Ancient Archer – Same as Huntsman, but the elf will also target wolves. Wolves reward a 100x bet prize when killed. Arch Mage – Same as Ancient Archer, but one or two extra Wilds are added after each spin. Forestall – Same as Arch Mage, but any elf appearing awards a superspin. Three extra Wilds are added after the superspin, and orc and wolf bonus prizes are doubled. Elf King – Same as Forestall, but players get eight free spins and any Superspin adds an extra Wild to the fifth reel.

Both these icons can be activated on the trail towards the fortress of Orcholme for orcs, or the citadel of Elveros for elves. Gambler can accept the triggered feature, or keep going until the next one comes up, where they may take the next triggered feature, or play the one they got previously. Taking any feature resets the feature trail.

On top of that, there’s also the Battle Bonus feature, which is activated when the Battle Bonus icon appears on reels two, three and four. An orc winner triggers Goblin’s Gold, while the elf winning activates Woodland Spins. If your chosen champion loses, a consolation prize between 2x to 10x is awarded. The winner also gets a victory point.

The first hero to receive three victory points is the champion. Victorious heroes have their prizes awarded depending on their win-loss ratio.
For orcs, a 3-0 victory rewards Orc Onslaught. Giant Spins, 3-2 grants the Orc Army feature, and a defeat gives the Hobgoblin bonus.
For elves, a 3-0 victory rewards Elf King. Arch mage, 3-2 grants the Huntsman feature, and a defeat gives the Elf Magic bonus.