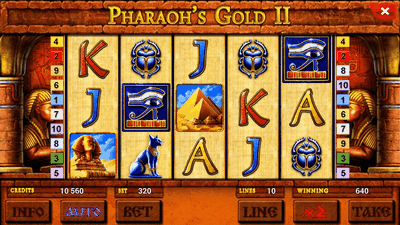 The Sphinx Welcomes you to the Reels!
Any game that is based on ancient Egypt is bound to have icons relating to the civilisation, and this one has a whole host of them included on its reels. Alongside the obvious symbol of a Pharaoh, there’s also the grandiose sphinx, the eye of Horus, the scarab beetle, the tall black cat, pyramids and various other relative imagery. Making appearances alongside these are the regular slot icons of A, J, K, Q, 10 and 9, and all of these icons are designed and presented in a very visually pleasing way. This is due to it being a part of Novomatic’s deluxe series, which not only includes advanced graphics, but also exceptional animations and sounds. While that may be the case for the game on the whole, spinning the reels will still play the regular ditty of the developer, which is way too arcade-sounding for this product.

The game features five reels and three rows worth of a layout, which is an average layout for an online slot game. There’s also a total of nine pay lines included in the game alongside, and these can be switched between a single line, up to three, five, seven and the maximum nine. There’s also the possibility of changing the credit value around from its minimum of . Furthermore, players can change the bet per line, with the option of placing a single credit on, or the maximum of 100 per round. This allows a maximum overall wager of 0 to be played in one go.

The Pharaoh Will See You Now

The special features of this game don’t stray too far from what Novomatic tends to repeat throughout several of its products. As such, you’ll find that the icon of the Pharaoh acts as a wild symbol. This will stand in for all other icons on the reels, except for the scatter, in order to form a win, and when it does, it will also double the pay out. Should five of these appear on a winning pay line with the maximum wager placed, you’ll receive a pay out of 0,000.

There’s also a scatter icon incorporated into the game, which is represented by the eye of Horus. These will pay out wherever they appear on the reels, with five of them showing up offering up a pay out of 0,000 with maximum wager placed. Should three or more of them show up, you’ll be rewarded with 15 freespins of the reels. This round will provide pay outs that are multiplied by three.

Finally, there’s a gamble round included in the product, which is one of Novomatic’s frequent additions to its games. This gives you the chance to be able to increase your winnings, and is triggered at the end of every winning combination created during the main game. If you choose to play the gamble round, you’ll be presented with the side game of a deck of playing cards. You’re required to guess the colour of the next card turned over, red or black. Should you guess correctly, you’ll see your winnings doubled, while if you make an incorrect guess, your winnings will all be lost.

As mentioned, the theme of this game has been done to death by games developers, and Pharaoh’s Gold II takes a wild stab at pulling it off correctly. It works in the visual sense of the word, although, the sounds that have been added are particularly unimpressive.