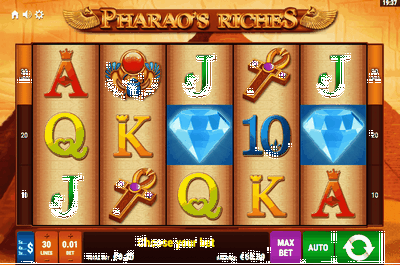 Egypt is a popular destination for many online slots and Pharao’s Riches is no exception. Any player who’s spun the reels on this kind of game before will recognise some of the traditional symbols you’ll find here. With a gold and amber background and the hint of pyramids too, there’s everything from scarab beetles to the Ankh Cross which you’ll need to line up on the reels to win a prize.

Riches on the Reels

Before you start playing take a few moments to scout out the treasure and find out exactly what kind of wins you could rack up. You can do this by heading out to the paytable, held on a separate screen away from the main game. Toggle between the two areas by clicking on the blue currency button below the reels.

Other than the top value prize of the pharaoh’s mask, you’ll need a line of at least three symbols in order to win. With a maximum of five, the more you match along an active payline the bigger your payout will be.

Line up the Money

Once you’ve finished surveying the wealth that awaits you’ll need to return to the reels and get ready to begin your expedition in earnest. There are 5 reels which include a maximum of 30 paylines which can be adjusted to suit your budget. Unlike other games which can be set much more precisely, Pharao’s Riches has 30 paylines as a maximum which can be reduced by 10 or 20 at a time leaving play on 10, 20 or 30 paylines.

Another way to control how much you spend is by adjusting the value of the coin. When you play Pharao’s Riches you specify the value of the coin per line, which is then multiplied by the number of lines in play to get the total stake. The minimum coin value per line is 0. This is the equivalent of a total min bet of 0. This spread means that those on a tight budget don’t need to spend a fortune to spin the reels but those who want to play higher have the option to do so too.

As well as lining up the regular symbols on the gameboard, many slots also contain extra ways to win on the reels. Pharao’s Riches may have plenty of big money payouts to be won but there’s a scarcity of bonuses. In fact, aside from free spins courtesy of a scatter, and a wild, there’s no additional symbols or ways to win. This means that there’s no bonus features or multipliers leaving you to concentrate on winning in one of the more regular ways.

The wild is represented by the blue diamond and can step in for any of the symbols other than the scatter on the reels. The scatter is a wonderful landscape view of the Pyramids and awards between 10 and 100 free games when you land three or more.

Travel Round the Zone

If you’ve enjoyed the foray into Egyptian territory you might want to try out other slots which provide a similar gaming experience. Leprechaun Goes Egypt by Play’n’Go is another slot in the same genre, and with five reels and 20 paylines there’s a real likeness to Pharao’s Riches.

Pharao’s Riches by Ballywulff is an online video slot which fits in with a popular genre. Like many of the Ballywulff titles, there are not a lot of extra features which can make the game feel a little basic. However, there’s scope for both newbies betting low and larger prizes for those targeting a big win so this is a game which could appeal to all.