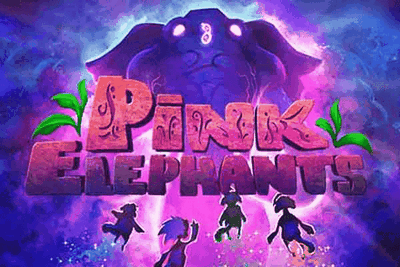 When it comes to original game ideas, you can always rely on Thunderkick. They pride themselves in innovative and engaging online slot provision. Pink Elephants slot is just another title that takes an average animal-themed concept and makes it unique.
The 3D visuals, superb soundtrack, and fun theme bolsters the game and paves the way for an engaging bonus free spin round, where wins can top the 8000x stake mark if you are lucky.

The slot has been one of Thunderkick’s most successful slots to date, so successful in fact, that the game maker launched a sequel in early 2020, which promises to keep the Pink Elephant legacy alive.

Pink Elephants is an African wildlife slot set on the dry plains of the Kalahari Desert in Southern Africa. The desert heat permeates off the dry ground to produce hot wins on the transparent reels.

Each 3D graphic detail is of premium class, showcasing the quality of animation that is possible in the slot industry right now. The rich use of colour and contrast provides admirable visuals. The game symbols take centre stage with ‘bushveld’ beasts, like a Pink Elephant high paying symbol, four distinct meerkat characters, and card deck symbols valued from 9 to Ace.

Special symbols include the game Wild (W). The scatter symbol and mystery scatter are both peanut and neon peanut symbols, respectively. These icons have a bearing on how quickly you trigger the main bonus round in the game.

Of course, no top game experience is complete without an immersive soundtrack. While the digeridoo sound between reel spins is a bit misplaced (from Australia, not Africa), the tribal beats that crescendo with each reel spin invite you to the warm heart of Africa.

Play Pink Elephant slot for wagers of €0. The RTP is an average 96. This will afford you rewards of up to €820,000 if you play the maximum stake.

Being an ‘All Ways’ pay engine

Instead, wins are made when three or more identical icons merely land on adjacent reels to one another from the leftmost column to the right, despite their positioning on the reel. Set at medium volatility, these pay ways can yield a great mix of win values, ranging from small to large.

Feel free to make use of the nifty AutoPlay tool situated on the toggle next to the ‘spin’ button. Here, you can set the machine to spin the game for you at a fixed bet increment. Whether you want to spin once or five thousand times, the game will roll the reels for you.

Mystery Scatters and Standard scatters are instrumental in bringing you bonus content in this game.

The Neon Peanut Mystery Scatter may land between one and five times on a single spin. The more of them you land, the better your chances are of triggering the bonus round.

The main bonus round consists of a free spin feature. You can trigger this game by landing three or more standard Peanut Scatters on the reels at the same time.

Play Pink Elephants mobile slot on your iOS and Android mobile phone and tablet, thanks to the integration of HTML5 software into the making of the game. This way, you play the game straight from your mobile browser, without the need for any added applications or downloads.

All Thunderkick user-interfaces accommodate play over any device and are easy to use, making your on the go gambling a happy experience.

Pink Elephants slot has put Thunderkick on the map. The game is superbly designed and offers a decent jackpot win too. If you want to play an attractive 3D slot, then Pink Elephants is a strong recommendation.