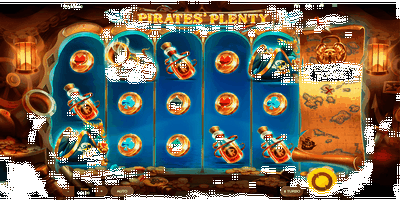 Set sail m’hearties, yo ho ho and a bottle of rum! When you come aboard Pirates’ Plenty for the first time, a one-eyed sailor who looks decidedly the worse for wear offers you a key before setting up the reels.

As well as this salty dog, the reels are having with the kind of booty you expect from a pirate-themed slot. Flintlock pistols, rum bottles, gold doubloons and a ship’s cabin in the background, full of treasure and cannon.

Few slots set the scene as quickly or effectively, but with Pirates’ Plenty you are out there, adventuring on the ocean from the first spin.

This theme is backed up by a strong showing in the graphics department. The symbols are all of a peice, with a cartoonish style that reminds one of the Captain Pugwash books.

The music is the real master stroke. Echoes of Hans Zimmerman’s score for Pirates of the Caribbean are layered, with a new layer added when the reels start spinning or a special symbol lands somewhere.

Overall this slot has a truly excellent visual presentation and style.

The base game starts with five reels and three rows. You can increase this to six reels by landing yourself fifty map symbols during the course of your spins at any one stake. This unlocks the sixth reel for you.

The sixth reel comes with additional stacked wilds with multipliers between times one and times five.

Whether on five or six reels, there are twenty win lines to play with.

During the base game the Wild symbol has a monkey on it. This symbol substitutes for all symbols except the Bonus and triggers a respin. Before the respin occurs, the monkey “steals” all the low paying symbols, leaving reels with just high paying symbols on them.

Hitting three Bonus symbols anywhere on the reels in one spin will trigger a Free Spin bonus. This starts with ten free spins and a number of Captain symbols are added to the reels.

Every three Captain symbols you collect unlock another treasure chest, turning a random low paying symbol into a Wild for the remaining free spins.

Additional free spins can be won by landing +2 or +1 symbols which add the corresponding number of spins to your total.

The return to player of this game is 96.

This is an oddly narrow range for any game and eliminates access for micro stakes players and high-rollers alike. The vast majority of players should be able to play at their preferred stakes, though.

Pirates’ Plenty is a highly volatile slot, which makes it a good match for our preferred slot machine strategies.

Pirates’ Plenty, with its swashbuckling setting and high-spirited tone of joyful adventure, is a delight to pick up and play. The music and art style puts you out to sea where anything is possible.

Behind the scenes, the game is pretty attractive too. The return to player is basically average, but the volatility is through the roof and goes up when you manage to uncover the sixth reel.

We recommend this one to all those who long to sail the high seas.