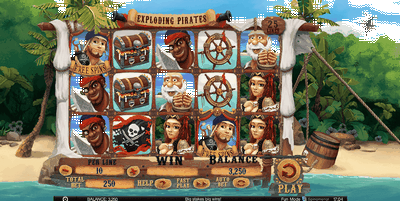 Sailing across the seven seas, owing your loyalty to no one but your captain – that’s the pirate’s life! Full of booze, women, adventure and risk, only the luckiest and most talented lived to tell the tales! And now, that experience has been brought to your fingertips with IGT’s slot. The enemy is just as hungry for the treasure as you are, and aren’t planning to let up on it. So you could be polite and let them have it. Or you can be a proper pirate and fight for it until the end!

We’d like nothing more than to claim spectacular graphics wait for you in this game. Sadly, we’re not real pirates, so we can’t lie to you like that.
This was the best IGT could do when this release first launched. It’s not a problem unique to Wild Pirates, and many gamblers are split on what to do. For some, gameplay is king, and the visuals don’t matter. For others, the slightly blurred symbols and no background image will be a deal breaker. Which side of the coin you fall on, dear reader? That’s something only you know.

You play this slot on a 5×3 board with 9 fixed paylines which pay left to right. There’s several special features to keep in mind while playing. None of these bonuses are ground breaking or particularly innovative. But put them all together, and you have a very enjoyable game in your hands! Wilds, free spins with multipliers, and two bonus games serve are the special features you can look forward to. And while our brain yearns for the Bonus Map and its awesome jackpot, our heart cries out for the awesomeness of the cannon and the ship battle bonus!

If something works, why change it? That seems to be the core idea behind IGT’s layout, because it has persisted through thick and thin! That said, there is a small, but very important change to keep in mind for this release. Since paylines are fixed, players only have to change their credits per payline and coin denominations. It simplifies setting your total bet, as you only need to adjust two values instead of three. Gamblers can stake between GBP 0. GBP 90 on each spin.

Those lucky enough to trigger the Bonus Map special feature will be able to win up to 10,000x your total stake! Honestly, that’s such an insanely good win, it could probably leave you set for the rest of your gambling career. Of course, the odds of actually landing such a win are quite low. As we’re certain you’ve come to expect, Wild Pirates doesn’t have any information on its volatility and RTP. In terms of variance, we’d probably place it between medium and high, leaning towards high.