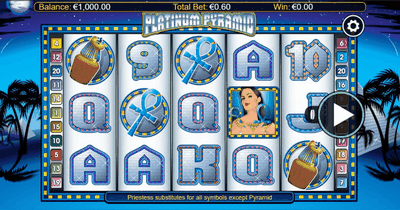 Though Platinum Pyramid online is first of all an Ancient Egypt themed game, there are some things about it that I haven’t noticed at other new slot machines from its category, namely its focus on objects made out of platinum. The game was designed by NextGen Gaming and it is offered in a configuration with 5 reels and 20 active win lines, while paying as much as ,000 during its regular spins, or 0,000 during the free ones. Besides free spins, the game also offers scatter icons, wild symbols and multipliers.
Betting and Prizes

As you will be able to in plenty of games, Platinum Pyramid will allow for the number of lines to be set by the player, along with the line bet. You may have from 1 to 20 active lines, and with wagers of . Your complete range for the bets will be from .

The game’s rewards look very good on paper, at least the biggest ones. Even in the base game, you can expect for rewards of up to ,000 to come your way, provided that you got the right wager for that kind of payout of course. You could even triple the jackpot, taking it to 0,000, if you get it while using the free spins awarded by the slot.

I haven’t found the features to be terribly interesting, at least if we’re talking about originality here. On the other hand, they can have a big contribution when it comes to the value of the payouts that you get, which is always good.

One major feature in Platinum Pyramid slot review have the wild symbol in the main role, showing the image of a Priestess, an attractive woman that’s holding a cane and an Ankh. The basic role, the one you will be taking advantage of most of the time, will have it act as a replacement for whatever symbol might need its assistance. It doesn’t have any use for the scattered Pyramid. Sometimes, there will also be wilds appearing together on the same active line, forming a combo that can pay even up to 7,000 coins.

The Platinum Pyramid doesn’t have the most typical image of a pyramid, but it can work very well for you. It’s going to appear at random locations on the reels and will both pay you and offer you its features. The payouts will start at the value of your bet, and will go up to 150x the wager.

Having 3, 4 or 5 scattered Platinum Pyramids will result in a feature with 5, 10 or 15 free spins, one where all the prizes will be tripled, even the jackpot.

The theme that was selected for this game is simple enough, as it covers the Ancient Egypt theme but with a new twist. The action takes place at night, and the majority of the symbols that were used have a platinum like look to them, at least the ones of lesser value and some of the feature triggers. If you look behind the reels, the image will be from next to a group of pyramids, but they’re made out of blocks of platinum that shine even through the night.

As symbols, you can expect for the Priestess to be present, along with the Platinum Pyramid, with the Ankh, Lotus flowers, a Canopic Jar, Eye of Ra and the poker icons which use platinum in their construction.

I’d call this one of the more average games that are released these days, and a combination of factors contribute to this, from its theme, to its graphics and even its features, which are good but very common in slots.