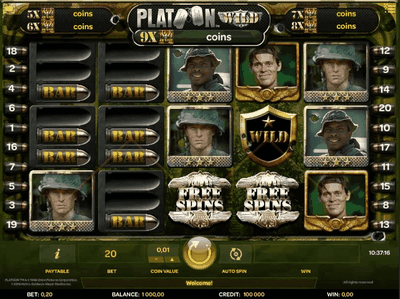 This Vietnam war-themed video slots by iSoftBet is based on the academy award motion picture of 1986 directed by Oliver Stone. The same characters that appeared in the film appear on the reels too. It’s nice to see that iSoftBet came up with something unique and thinked outside the box for a change. If you’re up for a bit of sweaty action in the tropical jungles of Vietnam then the slots will be a good fit for you.
With 30 paylines, 5 reels the strength of the game lies in its free spins feature that pays both ways and walking wilds re-spins. Against the backdrop of the reels you’ll see the tropical jungle of Vietnam and various gun-toting American soldiers out for blood. Paying symbols on the reels are Chris Taylor (Charlie Sheen), Big Harold (Forest Whitaker) Bob Barnes (Tom Berenger), King (Keith David), Sergeant Grodin (Willem Dafoe), dog tags, tanks (wild), card icons and helicopter. The symbol that offers the highest payout during the base game is Charlie Sheen’s character, 5 of them at the highest stake jackpot pays out 1,000 times your stake.

Platoon is a low variance slots that pays out often during the main game but wins tend to be small. The average payout percentage returned to the player (RTP) is 96.

The wild symbol that appears during the main game is the tank. I call it the ‘walking wild’ because when the tank icon appears it fires of a shot and shifts one position to the left awarding a re-spin-up to 5 re-spins can be won. You can win 1x, 2x, 3, 4x or 5x re-spins with multiplier wins of up to 3x. The re-spins keep on coming until the tank has moved to the left side of the reels. The biggest win I managed during the main game is 15x my stake.

As a kid I thoroughly enjoyed the film, with 4 Academy awards under its belt it was the best Vietnam war film I’ve seen. However, despite the film’s resounding success Platoon slots is not in the same league. The game blows hot and cold for me even though iSoftBet incorporated a roaming (shifting) wild streak during the base game. Triggering the free spins is another story and I might add not an easy feat. As hard as I tried I failed to trigger it even when I lowered my stake to £0. That said, fans of the movie will enjoy the slots and the fact that the free spins pays both ways makes it worthwhile.