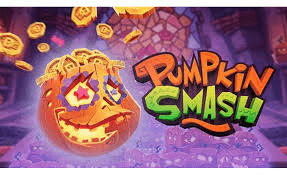 Pumpkin Smash casino slots is a 5 reel, 20 payline slot powered by Yggdrasil Gaming. The game can be played from 20p to £100 per spin on all devices (including Android and iOS) and has a Day of the Dead theme. It comes with 2 bonus features where you smash pumpkins to reveal free spins, single symbol multipliers and up to 875 times your stake in coins.
Visually, Pumpkin Smash follows the high standards set by Yggdrasil Gaming in all their releases – with plenty of colour and cheer, this South American inspired game is based on the Day of the Dead holiday. With angular and jagged symbols, you will see 4 high paying pumpkin sugar skulls symbols as well as 4 low paying card suits on the reels. You will also see a wild symbol that replaces all other symbols bar the Bonus symbol. As you’d expect, Pumpkin Smash mobile slot looks superb.

When it comes to bonus features, you have the Pumpkin Smash Bonus feature which applies in both the base game and free spin mode. To trigger in the base game, you need to get between 2 and 5 bonus symbols anywhere on the reels – you will then smash the corresponding amount of pumpkins (i.

Access to the Free Spins feature where you’ll receive between 7 and 30 free spins (if you got 3 or more bonus symbols). A multiplier between 2x and 7x that applies to 1 single symbol – if you get 3 more bonus symbols, that symbol will have the selected multiplier when it appears and is part of a win on a free spin. Between 2 and 375 times your stake as a cash prize.

Once in the Free Spins feature, landing 1 to 5 bonus symbols will trigger the Pumpkin Smash Bonus feature – you will then smash between 1 and 5 pumpkins will which yield between 2 and 10 prizes each.

Between 1 and 16 free spins (if you get 3 or more bonus symbols). A multiplier between 2x and 7x on 1 single symbol (not the wild) when it’s part of a winning combination. Between 2 and 875 times your total stake as a cash bonus.

Pumpkin Smash bonus is all about getting the bonus symbols in order to smash pumpkins – I have received 30 free spins initially with a 5x multiplier on the 2 highest value sugar skull symbols which resulted in a 670 times stake win overall. I also like the fact you could win up to 875 times your stake for getting 5 bonus symbols in the Free Spins feature.

I found Pumpkin Smash to be a medium variance offering with the potential for decent wins in both the base and Free Spins feature. It looks fantastic (like all Yggdrasil Gaming slots) and offers a unique take on the Day of the Dead theme which is quite popular – I also suggest you play Microgaming’s Beautiful Bones and Play ‘N Go’s Grim Muerto if you like theme.