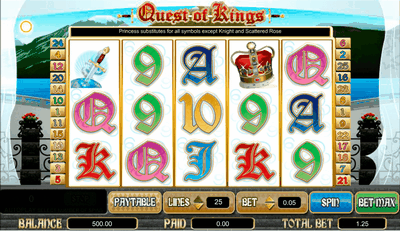 Go on an adventure back in time to the medieval era of knights and princesses. You guessed it—Quest of Kings is based on the King Arthur and his roundtable of valiant knights. This slot offers players the opportunity to help a lovesick knight find the princess, his long lost love. Quest of Kings is a 25-payline, 5-reel video slot game by online casino software developer Amaya Gaming. Quest of Kings features a maximum jackpot payout worth 0,000. Quest of Kings is Mac-compatible.

Chivalry is Not Lost

Quest of Kings has a medieval-England theme filled that is based on the chivalrous and brave knights of King Arthur’s reign and the princesses they protected. Behind the reels sits the king’s castle and a magnificent view of the ocean and mountains. Game symbols include the Crown, the Sword, the Scroll, the Princess, the Rose, and the Knight, as well as standard playing card symbols. The Princess is the highest paid symbol, which is worth 8,000 coins if there are 5 of a kind of her on the reels.

Quest Quest Of Kings bonus has many great features from the usual suspects like the wild, scatter pays, and an interactive bonus round. The Princess is wild and capable of substituting for any of the symbols besides the Knight and the scattered Rose. The scatter Rose is the triggering symbol for the bonus, but also pays on scatter wins as well. All scatter pays are multiplied by the total bet and then added to the winnings on the paytable. Scatter pays apply multipliers from 2X to 100X times the original bet when 2 to 5 Rose icons appear across the reels.

This Knight symbol will trigger the Knight Special Feature whenever it appears on reels 2, 3, or 4. Wins incurred during this event are added to scatter and payline winnings. After regular winning combinations and scatter pays are awarded, the Knight will transform into the wild Princess and any additional winnings will be awarded.

In order to trigger the interactive bonus round, a player must spin 3 or more Roses on the reels. Players are asked to choose 3 out of 5 of the towers in an effort to locate the princess. Whenever the princess is found, random prizes are awarded. If the princess is not found, a consolation prize is awarded.

Twenty-five adjustable paylines can be wagered starting at just 0. A max bet on one spin on Quest of Kings will cost you 500.

Quest of Kings may be a medieval themed game, but it has all the makings of a modern-day slot game. Aside from some subpar graphics, slot players who are interested in medieval times, as well as active slots, will enjoy this game. Another slot game based on historic and legendary tales is Queen of the Nile by Aristocrat, based on none other than Cleopatra, herself.