Ra And The Scarab Temple 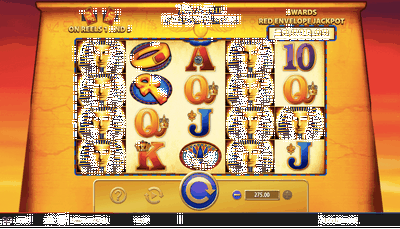 Use the (-) and (+) buttons on your game panel to set your bet, then click the SPIN button when you’re ready to get going. There’s also an AUTOPLAY button to the left of the main SPIN button if you’d rather sit back while the reels spin automatically.
Red Envelope Jackpot

An Obelisk appearing in any position on the reels will trigger the Radiating Wilds Feature. If this happens before any wins are evaluated, the Obelisk and all symbols one position to the left and one position to the right of the Obelisk will become Wild. If a Wild replaces a Bonus it becomes a Wild Bonus and if a Wild replaces a Red Envelope it becomes a Wild Envelope. After all Wilds have been placed, all winning combos will be evaluated and the Radiating Wilds feature will end.