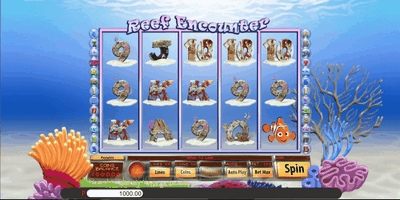 If you liked Finding Nemo and you like online slots then you’ll be interested to hear they’ve been combined on a new video slot called Reef Encounter. As well as including a selection of the films characters there’s also additional features in the form of wilds, scatters and free spins.
Reef Encounter casino slots Theme

Reef Encounter, as its name suggests, is set under the sea with beautiful corals and plants surrounding the reels. These plants even pass ever so slightly in front of the buttons, although this enhances their appearance rather than masking them.

There are twelve different reel icons in total which each follow an undersea theme. These include clownfish, rainbow fish, turtles, starfish, octopus and seahorse icons. The remaining designs are traditional figures which have been given a themed look (9 to A figures).

There are a good range of bets available which include penny wagers. Players are able to select from a range of options to tailor their bets up to per spin. As this is an international game you can also play it using £ or €.

The clownfish, aka Nemo, is wild which allows it to substitute for any other icon except for the turtle and octopus scatters.

The Turtle scatter can award prizes when three, four or five appear in any area of the screen. You’ll win 5, 75 or 2,500 coins respectively if this happens, the latter is the second largest prize available on the entire slot.

The octopus icon works in a similar way, except three or more of these icons will award free spins where all wins are doubled. You’ll win 10, 15 or 20 free spins if three, four or five icons appear on screen.

Our Take on Reef Encounter Slots

Obviously this isn’t an official Nemo slot, but it’s just as cute and entertaining. You can play it at any of the casinos below with some even offering free play to unregistered players. If you’d prefer to play for real money, you can do that too (be sure to claim the exclusive bonuses).