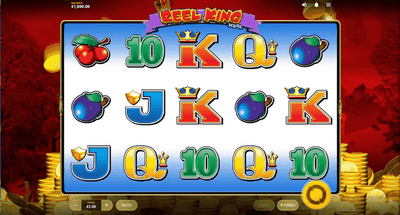 Topics: Reel King Mega slot review Try for Free How to Play Play for Real Money Alternative Slots
If you are a fan of the land-based slot classic Reel King by Astra games, you’re going to love Reel King Mega online by Red Tiger Gaming. By bringing the best features of this fan favourite and giving them a modern online twist, the developers at Red Tiger have done a great job at remaining faithful to the original yet still making improvements.

In this expert Reel King Mega review, we have graded the game based on strict criteria that takes into mind the graphics of the game, the bonuses, the special features, and the RTP rates. It’s important to us that you have an enjoyable gameplay experience, so we’ve done our best to ensure that the titles are scored equally.

We are firm believers that if a free demo version exists of a slot title, you should try it. Fortunately, in this case, we have provided a chance for you to play Reel King Mega slot machine. This will give you the chance to get to know all of the features of the game without having to risk your cash.

Luckily for slots players, the demo version doesn’t differ from the paid version, so if you enjoy the game and want to play with real money, there won’t be any new elements to the game that could throw you off. Also, because this game has a low volatility rate, it shouldn’t take long for you to try all the bonuses.

When you begin playing the Reel King Mega casino app, you will notice the fun, cartoon animations that depict the Reel King who watches over the game. The action takes place over 5 reels and 3 rows, and the simple 3D graphics in the background depict a scene of stacked golden coins in the king’s red-hued kingdom.

There are 20 fixed paylines that can be researched in the paytable. There is also an autoplay and turbo mode feature, which allows you to speed up the spin time. You will also notice that there is a Gamble feature to the game, which will allow you to risk your wins to earn a much bigger reward.

How to Play and Use the Features

The rules to the Reel King Mega online slot are simple. First, choose your stake below the reels. This can be one of 16 betting options between 20p and £200. Then, if you wish, select your autoplay and turbo options and take the reels for a spin. If you hit a winning combination of symbols across one or more of the paylines, you will win a multiplier of your stake.

There are a number of great special features to the game, including the King’s Crown, the Reel King and the Gamble. The King’s Crown is situated on the overlooking Reel King above the reels and will randomly bounce around the screen after a spin to turn one or more symbols into a Wild. The Reel King is a special kind of free spins round and is triggered when the background of all five reels lands yellow. This triggers a random amount of between one and five Kings to appear on each reel and start spinning a mini reel of its own. On its reels, there are four symbols – three different coloured 7s and a star.

If three 7s land, a multiplier will be won for each king, with up to 25x stake being won if three red 7s land, a 10x stake for three yellows, a 5x stake for three blues and a 2x stake for mixed 7s. If one star lands, the round is over. Additionally, the Gamble round can be selected after any win, which opens a spinning wheel. This will offer you a chance to choose how much you want to earn, with the higher value giving you a lower chance of the needle on the spinning wheel landing on your value.

There are eight different symbols to get used to. The lowest valued are the cherries and plums, then a 10, a Jack, a Queen, a King and a sack of gold. There is also a Wild symbol that can replace any symbol. The highest possible multiplier that can be won is by landing five gold sacks, which will give a 500x multiplier.

Did you enjoy the free play version of the slot? Well why not take your chances and play Reel King Mega for real money at our recommended casino? Because of its low volatility rate, it shouldn’t take you too long to try out all of the features of the game, and you should know in little time whether or not it meets your standards.

Reel King Mega is a great game to play if you are looking for a classic-style casino slot experience with bonus features. Based on our time with the game, we found that the Reel Kings free spins occur regularly enough to keep gameplay exciting. The Gamble feature was also a great way to add some tension to the game too.

The huge variance in betting limits means that this game should appeal to both low- and high-rollers. With a return to player rate of 96.

If you are wondering where to play Reel Kings Mega, then look no further – we’ve provided a link to a casino that we recommend below. Be sure to take a look around the casino’s slot catalogue before or after playing, too, as it has a well-stocked gambling library of similarly high-quality games.

Other Slot Alternatives Worth Trying

If you liked playing the demo in our Reel King Mega review, we have more similar titles that you’re sure to enjoy. For example, the original Reel King slot. Below, we’ve provided some bonus recommendations on other titles we have reviewed that provides a similar gameplay experience to Reel King Mega. We have selected some of our reviewed slot titles that either feature similar gameplay mechanics or 5 reel by 3 row setups. Many of these are by popular software developers NetEnt and Microgaming, who are industry leaders when it comes to creating engaging games that go on to become online classics. Don’t just take our word for it – try each one for free first!