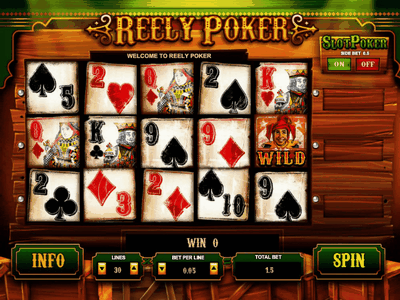 Reely Poker slot games is one of several different slots games that Leander developers have released which base themselves on different games entirely. This particular one brings elements of poker into play, and other examples have entertainment which combines slots with roulette and bingo.
The innovative design for the game may have players initially failing to realise that it is a slots game at all, since much of the screen is taking up by the playing cards poker fans will instantly recognise, but those who choose to explore it will soon realise that the basis for play is that of slot machines, and that the fresh interpretation makes for a very enjoyable spin of the reels.

The atmosphere which Reely Poker slot review strives to create is one of the Wild West, with the title displayed similarly to the manner in which the credits for a Spaghetti Western would be. The playing card symbols in use have been rendered in an old-fashioned manner, and this retro feel is enhanced by the fact that the slot itself is framed by wooden boards. A slow, relaxing piano-based melody accompanies play.

Reely Poker slot has two clear features, both of which are based on online poker NZ hands. The first is the side-bet option which players are able to make use of if they wish to, playing this alongside each of the spins, and the second is a feature activated by the ace scatter symbol.

Reely Poker casino app has five reels for players to make use of, and the maximum amount of paylines players are able to activate is 30. Players can choose any amount of paylines from this total, starting at just one and extending up, but should bear in mind that the side-bet option is only available when all 30 paylines are in play.

Activating all 30 and selecting the side-bet will have the player spinning the reels with an additional ten lines in play, and the side bet allows player to select a row of symbols, either the top
middle
Should the player’s chosen hand be the best of these, the side-bet will pay out at odds of two to one.

Reely Poker has a wild symbol in use for players, the joker, and this is able to stand in for any of the other card symbols excepting the bonus and scatter.

This joker wild is also the icon which is able to award players the highest possible payout, with 10 000x players’ coin amount being awarded should five appear in a row. The king is next in line as far as big payouts are concerned, rewarding players with 5 000x their coin bets when five are landed alongside one another, and players are able to calculate the possible rewards easily when they take into account that the winnings decrease as the playing values do. All payouts for Reely Poker require a minimum of three matching symbols to land alongside one another on an active payline, starting from the left-hand side of the game’s screen and moving over to the right from there.