Return Of The Rudolph

Return Of The Rudolph Slot Detail 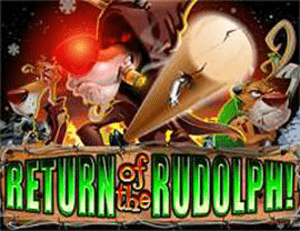 Look out guys! Rudolph is back and nobody is safe from his somewhat psychotic anger. Years of teasing have got him down and now he’s back for revenge. He’s taken up smoking and completely let himself go. All that’s on his mind now is payback. Boy does he love the smell of elf blood in the morning.
Return of the Rudolph Theme

This is the adult version of Rudolph and his red nose.

The great best part of playing Return of the Rudolph is the surprising idea for the theme. Rudolph is angry after so much time of being made fun of. He’s teamed up with a couple of other reindeer thugs to vandalize Santa’s sleigh, enslave the elves, tear up all the kids’ toys, and tie up Mrs. Claus before they go after Santa himself.

This is an excellent theme that almost comes as a shock for the utter destruction of an innocent children’s Christmas story. This is the adult version of Rudolph and his red nose.

Besides having a progressive jackpot (which I’ve been lucky enough to win on this game), the great theme of Return of the Rudolph is upheld with excellent symbols and special features. Angry Rudolph acts as the wild symbol laughing cruelly while waving a baseball bat with a crooked nail in the end. Santa also makes an appearance posing in the midst of magic battle with Rudolph, while the red nosed reindeer’s two thug buddies trigger special features.

Get three thug symbols and you get to select one of them revealing a bonus game like the Santa Strikes Back feature which awards you 7 free spins that can be and often are retriggered.

Return of the Rudolph Software, Graphics, and Audio

The Return of the Rudolph slot machine is a Real Time Gaming production. Graphics are at basic animation level as with most of Real Time Gaming’s slot machines. Animations however, are a bit more intriguing than you might expect. When the wild Rudolph symbol is used on a winning line he swings his bat threateningly while the wind blows his dark cloak and he chews on his cigar.

Audio is of basic quality, but the audio used is a perfect addition to Rudolph’s revenge. During bonus features a playful version of Rudolph the Red Nosed Reindeer can be heard as background music providing an excellent and ironic contrast to the otherwise semi-serious tone of the slot’s theme.