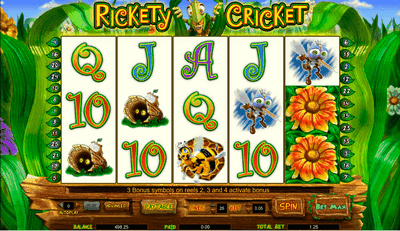 The Rickety Cricket slot from Amaya provides a good-natured theme full of colorful flowers and insects. There are 25 paylines to choose from, and the inexpensive spin options make this an excellent selection for players on a budget.
In this article, I’ll provide a thorough examination of the game, from the symbols and payouts to the lone bonus round. While reading this text won’t make you more likely to win, it should definitely give you a better idea of whether or not this virtual slot is right for you.

All slot machines have a basic set of rules that govern their performance. While bonuses and paytables are covered later in this article, right now we’ll examine the basics of how the gamefunctions.

The player can choose to activate anywhere from one to 25 paylines during a spin.
Winning combinations pay from left to right.
In the case of a payline win, the amount bet per line is multiplied by the winning amount to determine the overall prize value.
If a payline has multiple winning combinations, only the most valuable is paid.

When a scatter win occurs, it’s multiplied by the total wager and added to the payline wins.

This section deals with the paytable for the Rickety Cricket casino slots. All the game symbols are detailed below, as well as their corresponding payouts. If you’re curious about bonus rounds,that information can be found in the next section of the article.

Please keep in mind that the winning amounts listed below are not expressed in dollars, pounds, yen, or any other kind of currency. Instead, the winning amount is multiplied by the line bet to determine the payout, so think of it more like a winning multiplier. For example, a 250 win on a line bet pays 0.

The representation of this beautiful flower acts as the wild icon for the game, and it pays 30 for three matches, 250 for four, and 750 for five. It substitutes for all game icons except the bonus and scatter symbols.

This bonus icon takes the form of a simple leaf. When the symbol appears on reels two, three, and four, the free spin feature is activated. During the base game, getting three of these symbols also results in a 2x bet scatter pay.

The first patent for this bug killer, known formally as the “electrical discharge insect control system,” was granted to William M. Frost in 1932. It’s since become a mainstay on Americanpatios, and here it serves as the scatter symbol. It has to appear on the first reel in order to be active, and the presence of the queen bee, firefly, and mosquito symbols on the other reels help calculate the size of the payout. The number of icons determines the payout in the following manner: one symbol results in 2x the player’s wager, two symbols equal 4x bet, three symbols equal 8x wager, four symbols pay 14x bet, five symbols equal 20x bet, six symbols pay 30x wager, and seven symbols award 40x the player’s initial bet. When all the necessary symbols are present, you’ll hear the big zapper emit its famous sound, and the insect symbols immediately change to make it look as though they’re being electrocuted (although in a comical manner).

This icon represents the mated female in a honey bee colony, and she’s often the mother of most of the insects in the hive. One of the most valuable single symbols in the game, it pays the following amounts for winning combos: 25 for three matches, 200 for four, and 500 for five.

Also known as a “lighting bug,” this insect in the beetle family is famous for emitting a soft light after dark in order to attract mates or prey. The whimsical icon depicting this bug offers one of the following payouts for a winning combination: 25 for three matches, 100 for four, and 400 for five.

This blood-sucking insect makes up the deadliest animal family in the world, as it’s among the leading transmitters of infections such as the Zika virus, West Nile virus, yellow fever, and malaria. Residents in some parts of the world even sleep with mosquito nets around their bed to prevent bites at night, although the version of the bug depicted in this game seems less threatening (while still boasting a rather sharp proboscis). In the case of a winning combo with this symbol, players can expect to receive one of the following amounts: 15 for three matches,75 for four, and 300 for five.

Wander around a forest or swamp for any length of time, and you’re bound to come across plenty of hollow logs. Some contain nothing more than vegetation and bugs, while others serve as hometo a variety of wild animals. In either case, I wouldn’t suggest getting close enough to investigate, as some of the log’s residents might not appreciate your curiosity. When it results in awinning combination, the hollow log icon pays 10 for three matches, 50 for four, and 250 for five.

There are thousands of species of these tiny creatures dwelling in forests around the globe, and most carry around a small shell that they can retract into. This form of protection can prove surprisingly durable, even when it’s accidentally stepped on by a passing human. When it makes up a winning combo, the snail icon pays 10 for three matches, 40 for four, and 200 for five.

Like most slot machines, Rickety Cricket online slot uses poker card values to round out their list of symbols. I’ve never been a big fan of this practice, but the people from Amaya didn’t bother to consult me when putting this game together. The ace and king are predictably the most valuable icons, and they offer the following amounts when part of a winning symbol: 10 for three matches,25 for four, and 150 for five.

This poker card pays five for three matches, 25 for four, and 125 for five. Since the game also has a queen bee symbol, make sure you don’t get the two confused with one another.

Yet another reel symbol that’s inspired by the cards in a poker deck, the jack pays five for three matches, 25 for four, and 100 for five.

The least valuable of the game’s poker card symbols, the ten offers the following payouts for a winning combination: five for three matches, 20 for four, and 100 for five.

This slot machine offers a single bonus round that consists of free spins and win multipliers. I wish there were other special features to choose from, but keep in mind that Rickety Cricket isdesigned with low-rollers in mind. Therefore, it’s probably unreasonable to expect a wide range of bonus games with huge payouts.

In order to activate the bonus round, the player must simultaneously get bonus symbols in any position on reels two, three, and four. When this occurs, Rickety Cricket appears at the top of thescreen to let you know that you’ve won eight free spins with a random multiplier. During this phase, the following multipliers are available: 2x, 3x, 4x, 5x, and 8x.

When the free games begin, you’ll see Rickety Cricket plunge the screen into semi-darkness by turning off the lights. Don’t worry, though, there’s still more than enough illumination to seewhat’s taking place on the reels. Each time a spin is executed, Rickety Cricket also flips a sign around to display the number of free games remaining. As for the winning multiplier, it’s determined at random prior to the start of each complimentary spin.

This feature can be re-triggered, and each time an additional eight games are added to the player’s total spins. If you’re exceptionally lucky, you might even earn the upper limit of 98 free games.

Beneath the reels, you’ll find a number of controls that allow the player to operate the game and customize it to their tastes. In this section, we’ll look at all of these options.

When playing a slot machine, the most frustrating part of the game is obviously losing money. However, another point of possible irritation involves having to press the spin button hundreds of times during a gaming session. Luckily, this feature eliminates that annoyance, as the player has the ability to preset a specific number of spins to be conducted automatically. Whether you’re taking a bathroom break or just resting your eyes, this gives the player a welcome respite. A single auto-spin can be selected, but options all the way up to 50 are also available.

Once the number of automatic spins has been selected, the reels can be set into motion by clicking this button. When this happens, the “play” changes to “stop. By clicking on the latter before all spins have completed, the player can cancel the current autoplay session.

By clicking this virtual button, the player can examine the game’s symbols and their equivalent payouts. There’s also a section on the basic rules, but all that information is covered in this article for your convenience.

This section has up and down buttons to allow the player to adjust the number of active paylines. The minimum choice is a single payline, while the highest is 25. All number in between are also available, and the selection can be adjusted prior to each spin.

This section determines the amount wagered on each active payline. There are 15 options in all, with the five lowest including . The five highest, meanwhile, include . When all 25 lines are activated, the highest possible wager costs the player 5 per spin.

After this button is pressed, four seconds of music plays before the reels start spinning. The whole turn is completed in a total of six seconds, which seems longer than it has to be.

By pressing this button, the player is able to wager on all 25 paylines. The bet per line, however, does not change. This has always seemed like a redundant feature to me, but you’ll find it present on most Amaya releases.

This field displays the total amount of funds available to the player in their casino account. Each time a spin is made, a specific amount is deducted based on the number of active paylines and the wager per line. When a winning line turns up, the amount is increased. If the number in the field ever drops to zero, then the customer must deposit more credits into their account inorder to continue their session.

If the player is fortunate enough to get a winning spin, this field displays the size of their payout. Obviously, serious gamblers—and even casual players—prefer as large a total as possible.

Once a player has made all their selections and is ready to spin the reels, this field displays the size of their total wager.

While the Rickety Cricket slot machine doesn’t offer anything special, it’s still a solid release from the designers at Amaya. The graphics are colorful and good-natured, while all 25 paylines can be activated for as little as .

I wish more bonus rounds would have been present, but the scatter symbol somewhat makes up for this with a possible 40x multiplier. If you’re a low-roller or someone who plays with their child sitting nearby, this slot machine and its “cartoonish” symbols can provide fun for the entire family.