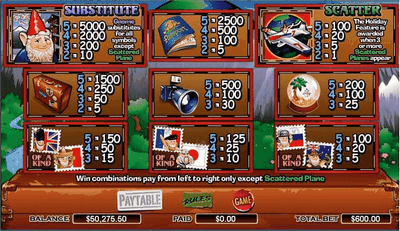 Garden gnomes have been a recognizable image in popular culture for years. Roamin’ Gnome takes the popular garden figure and sends him trekking across the globe. Cryptologic’s brings you a 5 reel, 30 pay line slot game so you can take part in his global adventure.

The slot takes place somewhere in the idyllic mountains, with a packed camel on the right hand side, ready to take you to your next destination. The symbols in the game all take their inspiration from the travel theme with postcards, a camera and other travel knick knacks being included.

You have scatter symbols that trigger the game’s unique bonus features as well as the gnome serving as the game’s wild symbol that will replace all other symbols except the scatter. In game you will be able to adjust the wager value of your coins from .

In Roamin’ Gnome, the slot symbols are all related to the gnome’s roaming. Rather than include the standard 9 to Ace symbol selection, Cryptologic’s has made the low value symbols postcards that the gnome sends home from his destinations. With the low value symbols you need at least three of a kind for a win to trigger. Postcards from Russia and New Zealand will reward you with a 100 coin payout for 5 matching symbols. Postcards from Japan and France are worth a 125 coin maximum and cards from Mexico and England are worth 150 coins. The final two low value symbols are a snow globe and a camera. The camera can get you an impressive 500 coin win.

The higher value symbols on the other hand will trigger a payout for at least two matching symbols. These include your luggage and your passport, which would be a disaster if you left home without them. They are appropriately valued at 1500 and 2500 coins respectively for their max payout.

The Gnome Is Wild

In Roamin’ Gnome at the top of your slot reel you will see a little gnome figure move from reel to reel during each spin. If you land the roaming gnome wild on the same reel that the gnome is standing on, the Roamin’ Gnome wilds feature is activate. All the symbols in that reel will become wild. Your prize will be multiplied by the amount you wagered on the pay line with better returns that what online blackjack real money Canada has to offer.

The main draw in Roamin’ Gnome is the holiday bonus feature. This phase is triggered by the three plane symbols that serve as the game’s scatters. You need to land three of them anywhere on the slot reels to enter this bonus round.

Once you do, you will be taken away to a new map screen. You will be presented with a selection of destinations to choose from. You must select three postcards from these destinations, each with a random reward behind it. These include cash rewards and free spins. The free spins you receive will also include a 2x multiplier for your wins. The gnome wilds feature will not count during your free spins.