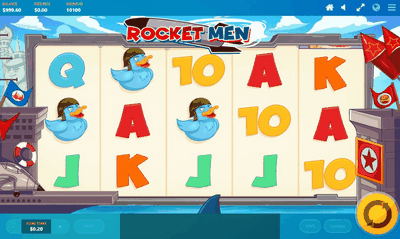 Select the paytable to see information about the slots, symbols and payouts in the Rocket Men slot machine Game.

Increase or decrease the bet to change your stakes, so you can play your way with the Rocket Men Online Slot Game.

Rocket Men Online Slot Game features an autoplay function which allows you to set a number of plays and win/loss limit.

Unsurprisingly, the Wilds in the Rocket Men online slot game are actually rockets!

When Don lands in reel 1 without Kim in reel 5, then Don’s Driving Range begins! He’ll fire golf balls onto the reels, smashing symbols and causing the symbol above destroyed ones to fall, allowing the player to make new lines – until he gets bored!

When Kim lands in reel 1 without Don in reel 5, then Kim’s Little Game begins! He’ll fire an array of Wild Rockets, and many will land on the reels meaning your next spin will likely be explosive!

It’s bazookas at dawn if both Kim and Don appear on the reels! The following Bonus Rounds are decided by who wins.

If Kim beats Don, then it’s Boom Time! Choose a rocket, any rocket, and hope it hits the most valuable targets! If a rocket misses America and lands in the sea, Boom Time is over!

If the battle between Kim and Don ends in a tie, then it’s Nuclear Spins! The Rocket Men online slot game really lives up to the name, as Don and Kim fire Wild Rockets at each other! The Wild Rockets move along 1 reel per spin, and if two Wild Rockets collide, they explode! The Bonus ends when either Don or Kim is hit by 3 Rockets!