Roll Out The Barrels

Roll Out The Barrels Slot Detail 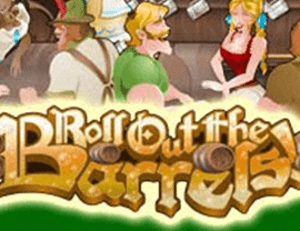 It’s safe to say that the people who attend Oktoberfest are keen beer drinkers. They drink it by the barrel full which is what this slot is themed upon. You’ll encounter plenty of on reel high jinx which includes wilds, scatters and free spins.
Roll Out the Barrels Theme

When the slot loads you are shown a busy bar with a pretty barmaid dressed in lederhosen. It’s fair to say she’s blessed in many areas, as is the slot once it has finished loading.

Reel icons are topical in design which gives the slot a polished feel. These icons include mugs, cuckoo clocks, pretzels, accordions, hats, bratwurst, lederhosen, accordions, patrons and the pretty barmaid.

The colourful reel icons are framed beautifully within five reels which have been designed to look like a traditional beer hall. This means you’re treated to wooden effect beams which separate the reels that are covered in rich greenery.

Coin bets range from 0. This means you can bet between 0.

Keep a look out for the laughing patron too. Five of his icons will award 2,500 coins which could net you up to ,250.

Roll Out the Barrels Slot Features

The barrels will be rolled out when one appears on the first or second reel. If a winning opportunity presents itself these barrels will expand to fill the entire reel which allows them to substitute for any regular reel icon.

No festival would be complete without someone blowing a huge Alphorn. On this slot three, four or five of these icons will award 10, 20 or 75 free spins respectively. What’s more impressive is that all wins gained during free spins are multiplied by three.

The busty bar girl also has a role to play because three of her icons will trigger the bonus round. The round involves several barrels which are overlooked by three barmaids. You choose from these barrels to win an instant bonus prize (much to the delight of the wenches).

Our Take on Roll Out the barrels

Oktoberfest may only occur once a year but that doesn’t mean you can’t enjoy this slot at any time. We like the chipper characters and thought the bonus features worked well too.
try it before claiming any of the lucrative offers below.