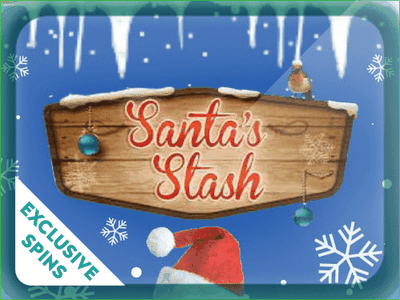 Santa ’s Stash is a seasonal video slot, which has been designed and developed by Daub. Santa’s Stash may be most popular during the Christmas period, although you can play it at seemingly any point in the calendar year. There are many Santa themed slots out there, but this one has a real Christmassy theme to it, which makes it a treat to play if it is the season. Santa’s Stash is played over 5 reels and 25 lines, and can offer players coin sizes of 0. Only one coin can be staked per line, so minimum and maximum wagers are fairly cheap in this slot, fixed at 0.
Special Features

Keep an eye out for the snowflake icon, for that is Santa’s Stash’s wild symbol. As a wild, it can replace all other icons in the game, barring scatter symbols. Prizes are actually doubled if the player lands a wild in a winning combination.

Should you locate 3, 4 or 5 of the snowflake icons on the reels in any position, then you’ll trigger 15, 20 or 25 free games, too. This means that wilds are not just substitute symbols, but also scatter icons, too.

During the resulting free spins bonus, all winnings will be tripled, and free spins can be retriggered if you land 3 or more wilds during bonus round gameplay.

A separate bonus round is also present in Santa’s Stash. Should you locate 3 or more scattered Santas in any positions on the reels, then you’ll trigger the bonus. During that feature, the player can pick one of five presents from the fireplace, for every Santa symbol that they landed to trigger the bonus. Basically, you’ll get between 3 and 5 picks in total. Every present has a multiplier inside it, and players could win as much as 10x multipliers for a single present, which will then be multiplied against the total bet they made to trigger the feature.

Santa’s Stash is not overflowing with special features, but given the incredibly cheap cost of a spin on this seasonal slot, it is definitely something that you may wish to try out. In terms of jackpots, you can win as much as 5,000 coins, with this Santa themed, non-progressive jackpot slot.