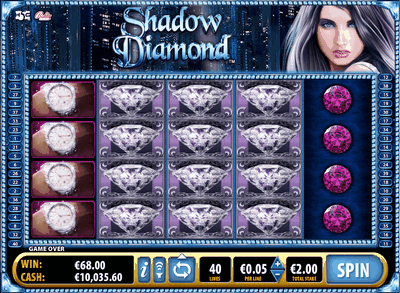 Prepare to be seduced into spinning the reels of Shadow Diamonds as the glamorous hostess gazes seductively in your direction while her hair flutters in the wind and she clutches hold of a massive sparkling diamond as strobe lights light up a city at night in a slot machine that promises wins to leave you dazzled for days!
The Shadow Diamond slot review places emphasis on a luxurious lifestyle as a rather handsome fella gets engaged to the stunning hostess – with big sparkling diamonds proving the way to her heart as she sticks a diamond ring on her finger – and necklace, and watch… there is just no end to the glitz and glamour on these reels!

Played across a 5×3 reel grid, Shadow Diamond contains 40 paylines and boasts a typical return to player percentage of 94% which we have seen in so many online slot machines developed by Bally Technologies. With the stakes per line ranging from only 1p up to £10 this means those of you who could only wish for diamonds can spin the reels from 40p, while those of you draped in diamonds can play for dazzling stakes of up to £400 each and every spin!

As soon as you load Shadow Diamond you’ll notice that the glitzed up reels boast Stacked symbols (Bally’s Super Stacks feature) which see reels partially or completely filled with the same symbol. Each of the reels contain mystery positions which are filled with one symbol only so that they appear stacked on the reels, and if you’ve experienced Stacked symbols before you’ll be all too aware of the extraordinary winning combinations that this helps to create. Plus, landing a block of symbols sees celebratory tunes ring out and diamonds splash out from the reels to highlight you’ve landed a big win!

Just how online slots function in most cases, there is a Wild symbol in Shadow Diamond casino app which is represented by the slot’s logo and this possesses the ability to substitute for all but the Scatter symbol, though five on a payline only results in a 25x win which is a little on the stingy side compared to the payouts in other Bally slots. The Scatter is hard to miss – it’s the massive shiny diamond and this is needed for the free spins feature.

The loved-up male and female characters the slot is based around also feature on the reels alongside a diamond necklace, diamond ring, diamond watch, plus various gemstones such as emeralds, rubies, jade, rose, and blue zircons!

You’ll be in for sparkling wins each and every time you land a full stack of Diamonds (Scatter symbol) on the second, third and fourth reels during the same spin – that’s 12 shining diamonds on the reels at once to make you dizzy with desire!

This feat sees you awarded with a total of seven free spins – a peculiar number I’m sure you’ll agree, and it’s pretty disappointing it isn’t at least 10 free spins like the free spins mode in so many online slot machines. However, before your free spins start playing out you’ll be presented with a different set of reels to differentiate from the reel set in the base game and you’ll then have to select one of the diamond symbols in order to reveal one of the other symbols (either the woman, man, necklace, ring or watch) and this symbol will now act as the Stacked symbol for the duration of your free spins mode.

The experienced online slots players amongst you can probably guess what that disappointing news means – it is not possible to retrigger additional free spins as no Diamond Scatter symbols make an appearance. While the Stacked symbols do help create sparkling wins, you can’t help but feel disappointment when you compare this free spins mode to the one in the Tiger Treasures slot machine and many others that have also been developed by Bally – as sparkling as the diamonds are, it’s simply not enticing!

A Taste of Luxury

Diamonds and other gemstones have been the subject of countless online slot machines but Shadow Diamond will be left in the shadows as one to avoid and may leave you feeling as miserable as the hostess looks – certainly not like she’s just been presented with a massive rock!

While the Super Stacks feature also results in big wins, the free spins mode is pretty disappointing and Crown Gems from Barcrest or Gems Gems Gems from WMS are much better alternatives!