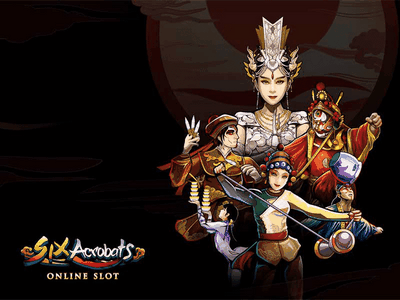 Each of the game’s six acrobats has a particular skill, typically involving ropes, juggling balls or ninja stars. Whenever you record a win with one of the symbols by matching three or more on a payline the acrobat will show off their skill set via a neat animated sequence. You’d think that a game with just 9 paylines wouldn’t be dispensing anything too wild on the jackpot front, but Six Acrobats turns out to spring a pleasant surprise here. There’s up to 390,000 coins to be won, which ought to be more than enough to keep you going.

The game board utilises a standard 5×3 layout and is designed to resemble a stage, the sort of stage on which you might watch half a dozen acrobats perform breathtaking feats of agility. Red is the dominant colour, including a number of red lanterns that hang to the left and right of the reels. One symbol you’ll be hoping to see a lot of in this game is wild. Its presence is always a harbinger of good things, but wilds have extra powers here. In the base game they’ll treat you to a nice 5x multiplier which is much more generous than the sort of multiplier that’s normally doled out in such games.

The game’s scatter symbol appears as a goddess with wings and once again the animation that ushers in the arrival of three of these beauties is pretty special.
Best of all, when this happens there are some generous multipliers to be claimed with the aid of wild symbols.

At best, you’ll earn a fat 25x multiplier. In addition, each scatter that appears during free spins will grant you another spin on the house. Because the six acrobats look so lush, Microgaming have elected to keep things simple with the playing card values. A mere flick of paint is all that’s used to delineate them, but they nevertheless complement the game rather than detracting from it.

Something Similar to Try

The free Six Acrobats slot has a lot to love about it, but some gamblers will be deterred by the high variance. If you can live with it though you’ll be in for a treat as you get in about this lively game, whose RTP comes in at 95. Microgaming have so many slots in their back catalogue that it’s inevitably that there should be a few other titles which play in a similar fashion. One of these is Break Da Bank Again, but that game does not have as high a volatility as that of Six Acrobats.

A highly entertaining game to play for fun or play for real money, Six Acrobats online slot is a riot from the very start. The animations and graphics are what carry the game, helping to compensate for those lengthy spells when you’re spinning the reels but there’s not a whole lot happening in terms of big wins. The mobile-compatible Six Acrobats is a game that packs in a surprising amount for a slot with just 9 paylines. It just goes to show that you should never judge a book by its cover or a slot by its specifications. A jackpot of 390,000 coins is not to be sniffed at.