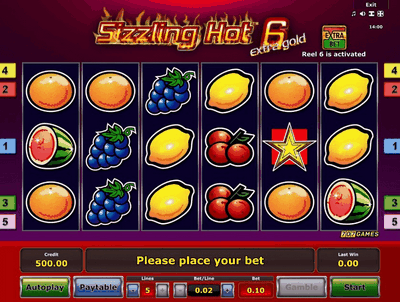 As mentioned, there are six reels in this game, which provides an altogether more innovative view of the game than many others. A total of three rows have also been included alongside this, and upon these reels and rows, you’ll find the aforementioned fruit icons. Therefore, you’ll be able to see juicy cherries, tangy oranges and lemons, succulent plums, flavoursome grapes and tasty watermelons. Not only that, but there’s a few additional symbols included on the reels, including stars, jesters and 7s. Each of these icons are wonderfully designed and perfectly animated when included in a winning combination. They’re still not hugely perfect in this area, but they do what they’re supposed to do.

Alongside its icons, reels and rows, Novomatic have also added five separate pay lines, and these are fixed in place. However, players are able to alter around the bet that they place per line by utilising the plus and minus buttons at either side of the current amount. Doing so will allow you to go from the minimum of . Should you have all pay lines active and you max out the bet per line, you’ll be able to place a maximum overall wager of per spin. Furthermore, there’s an ‘Auto Start’ button, which allows for up to 100 consecutive spins of the reels at the same wager level.

What’s so Special About Sizzling 6?

Apart from having six different reels, which is special in itself, providing an old-fashioned, classic feel, this game also provides players with the star symbol, which works as the scatter. These icons can win you up to 2,000,000 coins, which will be paid out if you manage to spin five on to the reels at maximum wager level. In addition to this, the 7 symbol is able to pay out up to 50 times your total wager amount, which will be provided if you spin five on to a winning pay line.

Not only that, but this product also has its own wild icon, which is represented by the aforementioned jester symbol. These have the power to award you instant wins, and they’ll substitute for all others icons on the reels, with the exception of the scatters. Should it feature in a winning combination, it will animate itself wonderfully, and enhance the pay out amount.

Finally, the only other extra which has been included in this game is the gamble feature, which Novomatic makes use of in many of its products. This is triggered at the end of every winning combination formed, and will provide you with the opportunity to take your winnings as they are, or play a side game to try and increase them somewhat. Opting to do this will present you with a deck of playing cards, and the only thing you need to do is guess the colour of the next card to be turned over. If you do so correctly, you’ll be given a reward of your winnings being doubled. However, an incorrect guess will see you lose them all, so do be careful in this round.

One to Play, or Stay Away?

Sizzling 6 slot machine is a very decent game, if you enjoy playing products which are based on the classic slot games. There are, generally speaking, several more interesting features of this one than what can be found in the standard games of this genre, so we would highly recommend it for this purpose only.