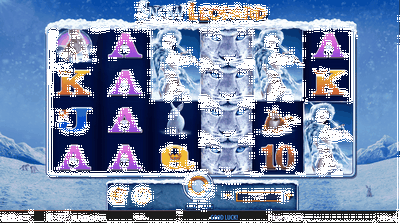 Snow Snow Leopard online is developed by Barcrest. Released back in 2014, it’s set in a frozen, desolate landscape during the middle of a snowstorm. A few animals can be seen in the background, including a white rabbit and a pair of leopards – these are some of the animals that appear as symbols on the slot’s reels.

There are a few good bonus features to be found in this online Snow Leopard slot games, including the Big Bet feature which is available on lots of other Barcrest slots. This feature, which costs extra, gives you the chance to play on a double reel set with increased chances of winning and, depending on which option you go for, added multipliers to boost your winnings even further.

You can play Snow Leopard slot on a wide range of devices. It’s playable on desktop computers and laptops, as well as smartphones and tablets. If your handheld device runs on the iOS or Android operating systems, you should be able to play the slot machine Snow Leopard, and it should run quickly and smoothly.

Snow Leopard is played on a reel set with four rows and six reels. The symbols include six card ranks, each one a different colour: green 9, red 10, blue J, yellow Q, orange K and purple A. These are the low paying symbols. As for the high paying symbols, they include a white rabbit, a squirrel, a leopard and a female hunter. There are two bonus symbols to look out for: the snow leopard, which acts as the slot’s wild symbol, and the yellow and blue paw print symbol, which acts as the scatter.

When playing with two reel sets, you can win 100 free spins by landing six paw print scatter symbols anywhere across the two reel sets. During the base game, you can only ever land five scatters for a total of 50 free spins. While the standard game has 40 paylines, when playing the Big Bet feature, there are a total of 80 paylines in play.

The Snow Leopard slot machine has an RTP of 94%, though during the Big Bet feature this can increase to as much as 97. It’s a medium variance slot, so you should expect a mix of small and large wins to come around every so often.

Overall, Snow Leopard is a great online slot to play. It’s nicely themed and has some pretty good bonus features and gives you the chance to play for some higher winnings if you fancy spending extra and taking a risk.

If you want to play the free online Snow Leopard slot machine, you’ve come to the right place. Here at our site not only can you play Snow Leopard slot online for free, but you can also play all of the other slots listed on our site for no cost at all. If you’re after some free gameplay, you’ll be pleased to know that you can play our slots as much as you want without having to create an account or deposit any real money. Our site is the place to be if you’re after free slots with no download required! We have so many free slots by different providers that you’ll be spoiled for choice.

If you’re not too familiar with online slots, it’s a good idea to play for fun first. This way, you get to see how the slot’s features work before you start playing for real money. Barcrest’s Snow Leopard slot game is quite straightforward, though it’s still worth having some free spins before risking your own money.

The slot is great fun to play thanks to the wild reel you have on every spin, plus the free spins feature that can potentially give you loads of free spins to use – plus, it can be retriggered! Then there’s the Big Bet feature. To get the most out of this, you’ll want to play Snow Leopard slot game for real money, as the chances of winning are greater!

If you like the sound of the slot machine Snow Leopard by Barcrest, why not play for real money? Look out for the female hunter and the snow leopard symbols, as both of these offer payouts worth six times your stake for landing six on an active payline.

When playing with real money, there are bet limits in place. The minimum bet you can place is 0. The symbols offer payouts whenever you land three to six of them on one of the 40 paylines. All of the paylines are fixed, so all bets cover all paylines.

Of the slot’s symbols, the 9, 10 and J are the lowest paying ones. The two highest paying ones are the snow leopard and the female hunter. Both of these can reward you with a payout worth 6x your stake for landing six of them on one of the paylines.

If you’re something of a risk taker, you may want to pay extra and play the Big Bet feature. Should you go for this, you’ll stand a chance of winning bigger payouts – there are multipliers in play (depending on which Big Bet feature you go for) and two-reel sets with 80 paylines in total. Also, while you’re playing Big Bet, the payouts from all of the slot’s symbols are doubled.

Remember to look out for casino bonuses when searching for an online casino to play Snow Leopard at. Find casinos that have slots by Barcrest and most of them should have the Snow Leopard slot game available. Check out the welcome offer to claim free spins and/or bonus money (the rewards vary from casino to casino) and be sure to make the most of any other promotions as well.