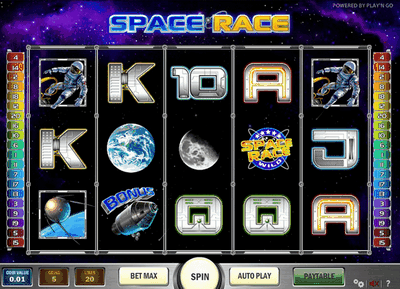 In a classic set-up, Space Race bonus is a five-reel slot game, with up to 20 selectable paylines. You can bet up to five coins per line and adjust the coin value as per normal. There isn’t much out of the ordinary with this game, and if we’re being honest, the visuals aren’t as futuristic or sci-fi as you might hope. Think of it as a video slot that’s more Space Invaders than Interstellar. It’s also lacking in any real soundtrack. The intro has predictably low-budget sci-fi music, but during gameplay there are only basic “spacey” sound effects. It does have some decent extras though, as you would expect from a Play’n GO title. The wild symbol is a big help in getting winning combinations, and the scatter symbols allow for a win with only two matching icons. Spot three or more meteor symbols from out of your spaceship window and you’ll fly straight into a meteor shower. You get 15 free spins during which the meteors act as wilds. Normally space is a lonely place, but if you happen to be close to three rockets at once, then it’s time to tell Houston you have a Bonus Round. Clearly inspired by Battleships, you need to safely guide your spaceship through increasingly difficult levels of asteroid showers. Just don’t let that droid remind you that the odds against successfully navigating an asteroid field are 3,721 to one!