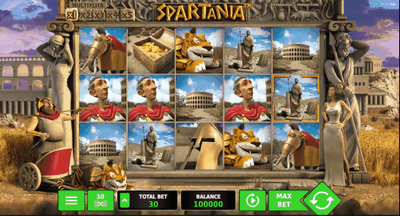 Spartania online slot is a superbly designed ancient Roman themed slot from Stake Logic. Boasting fantastic 3D visuals, this 5 reel, 30 payline game isn’t short on features either. Look out for expanding wilds, random multipliers of up to 5x on every spin as well as click me and wheel of fortune style features. Play on your tablet, mobile or desktop device from between 30p and £48 per spin.
Based on ancient Rome, the design in Spartania has a real classical look – set against a hilltop filled with marble-columned buildings and flanked by a pair or ornate statures, the reels look terrific. Each symbol matches the theme. On offer are a statue, warrior’s helmet, Colosseum-style arena, elephant in battle gear, tiger, warrior, woman and Caesar – 5 of the latter will get you 500 coins.

The stone tablet is the game’s wild – it appears on the middle 3 reels only. When it does hit, it will expand to turn the whole of that reel wild. This is known as the Expanding Wild feature. Above the reels you’ll see a multiplier meter. This is in play on every spin and will boost any winning paylines by 1x, 2x, 3x 4x or even 5x.

Spartania slot review comes with 2 main bonus features. Land 3 of the chest of coins symbol on reels 1, 2 and 3 on the same spin and you’ll trigger the Click Me Bonus Game feature – you’ll then be presented with a choice of 28 coins behind which lie cash bonuses. Keep on picking until you find a collect. The multiplier from the triggering spin will then be applied to your haul.

When the wheel symbol lands on the middle position of reel 5, you’ll trigger the Wheel of Fortune feature – spin the wheel and you’ll win a multiplier of between 5 and 250 times your total stake from the triggering spin. Once again, the random multiplier from the base game will be applied to your total which offers the potential for some massive payouts of up to 1,250 times your stake!

Spartania mobile slot is a very impressive slot – the design is so good it’s hard to believe this slot comes from the Novomatic stable! Matching the fantastic imagery is a stirring soundtrack that matches the martial theme.

The features are good too – the eagle-eyed will no doubt have noticed the lack of free spins. That’s pretty much the only bum note we found with Spartania. The other extras, complete with expanding wilds and ever-present multiplier mean it’s not a deal breaker.

The classical world has been a hugely popular theme for slot developers. With its terrific design and nice range of features, Spartania is a very tidy new addition to the ancient genre. I also recommend you try their flagship game, Football Gladiators, which also has a similar theme.