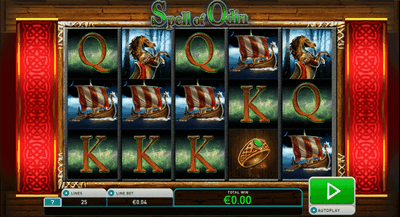 With a stirring soundtrack thundering away in the background, the action has a suitably epic feel given the theme. Symbols on the reels include lower value playing cards from A to 10, a bucking horse, gold ring, Viking longboat and a trio of warrior women, each of whom takes up two symbol spaces. You only need to land 2 of the women to create a winner. Land 5 of the blonde woman for a payout of 800 times your line bet.
Appearing on reel 3 only, the mighty Odin is the game’s wild – when he appears fully stacked on that middle reel, the stacked symbol will duplicate and turn another reel completely wild.

The sword and shield is the bonus symbol – hit 3 of these anywhere on the reels to trigger the Spell Free Spin Bonus feature. Here you’ll be awarded a dozen bonus spins with 1 of 3 modifier extras.

Multiplier – All wins boosted by a 3x multiplier and trebled. Easy re-trigger and wild – Free spins are played on a new set of reels where the chances of hitting the Odin wild and re-triggering the free spins are much improved. Wild – A stacked Odin wild boosts wins by 2x. Two Odin wilds and wins are quadrupled (4x multiplier).

Visually, Spell of Odin is serviceable enough – the images are quite crudely drawn but they work well enough when they land in stacked formations. The sweeping soundtrack is certainly in keeping with the theme though and certainly enhances the action.

The features are limited but offer potential – the duplicating stacked wild helps move things along in the base game. If we had to plump for one of the modifiers we’d go for the easy re-trigger. There’s little to choose between all three though.

Spell of Odin isn’t the most sophisticated slot you’ll ever see but given the barnstorming theme, that’s probably no bad thing. There’s entertainment enough on offer here and if the Spell of Odin weaves some magic there are decent winning opportunities available in this Norse epic. If you like the theme, Microgaming’s Thunderstruck II or WMS’ Viking Vanguard are solid choices.