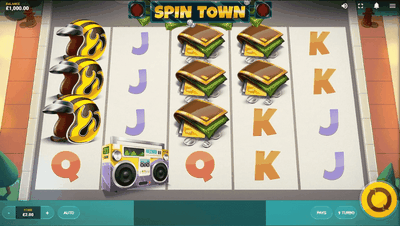 Mexican and or Irish themed slots are always packed with national clichés however in Spin Town casino app Red Tiger Gaming have really shaken things up and put England in the spotlight. The slot plays out over 5-reels with 40 pay lines, can be played on all devices and has a bet range that starts from as little as 20p per spin up to £200 per spin which will make this a very attractive prospect to a wide number of players.

Spin town is set upon a cartoon road and players can expect to find the usual playing card symbols from Jack to Ace on their reels as well as a key, wallet, ghetto blaster and a motorcycle helmet. The top value symbol is depicted by a suitcase which is full of cash, and players that are lucky enough to land five suitcases will be rewarded with 15 times their stake.

There are an additional 15 character symbols and they are all wild! The wilds will pay players x2, x6 or x20 their stake when they land a 3, 4 or 5 symbol combination. The wilds are on the side of the cartoon road ad when the green man appears on the pelican crossing which can be found at the top of the players screen the wilds will walk across the reels moving one position with every spin. Apart from these wilds there are some which are even more special.

Firstly, there is the Sleepy Wilds feature where an old man or woman can fall asleep whilst they are crossing the road which results in them staying in play for longer giving players more win potential. The second feature is the Speedy Wilds feature which sees two young people which can move over the reels two positions at a time. Finally, there is the Couple Wilds feature in this feature if the couple meet up, they morph together to form a wild umbrella, this new wild comes with a x2 multiplier and doubles any pay out from winning combinations.

The slot is complete with three superb bonus features the first of which is the Rock ’N’ Roll Shuffle feature, where if players manage to land three of the Rock ‘N’ Roll symbols and four of the Beatles hits wilds they could be rewarded with x10 wilds across their reels. Next comes the March feature which is activated when the player lands 3 guardsman symbols in the same spin, with this then activating the 1×2 guardsman wilds that are able to cross the reels from either side of the screen. Finally, there is the Hooligan Advance feature which becomes active when the player lands three of the kick off symbols which wakens the hooligans. These group of wilds can move across the screen from left to right and right to left.

There is no doubt that Spin Town bonus is a really silly slot and although there is a lack of free spins the wild extras more than make up for it. The variance is on the low side throughout the slot with the biggest pay out on offer being just x400 of the players stake on every spin.

I did enjoy playing Spin town, but I do think this is partly to do with the cartoon design, which is expertly executed, and the wild extras is not a feature I had come across before, so this really defines Spin Town from all of the competition in terms of game play. I wouldn’t go as far as to call the slot a classic, but it is definitely worth a spin or two.