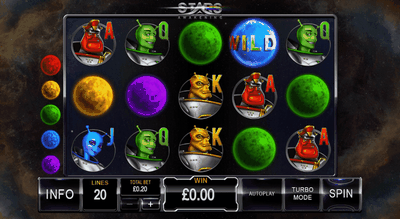 Stars Awakening features an original free spins mode called Supernova Scatters Feature. There are 3 levels, and consecutive wins take you to the next level, and the number of re-spin symbols increases. Also, any high win scatter symbols anywhere on 3, 4 or 5 reels will pay out the value listed on the pay table multiplied by each number of times the symbol appears on each reel.

Playtech takes you on a journey through the galaxy to with Stars Awakening, a new, fun slot with spinning planets and friendly-looking aliens, also packed with some great special features. The special effects, especially the spinning, colourful planets that light up during the Supernova Scatters Feature, and new symbols cascading to cover the previous ones when you press the spin button all add to the fun of the game.

Stars Awakening slot machine is a 5-reel by 3-row slot that comes with 20 pay lines and a 95% RTP. It’s a cascading-type slot in that when you press the spin button, new symbols fall to cover all the older ones.

The symbols include the aliens (low-paying symbols), planets (high-paying symbols) that become scatters in the re-spin feature, as well as Wild Symbols, Giant Planet Symbols.

Special features include the following:

Stars Awakening casino slots has no jackpot in the traditional sense. However, some huge wins can be made especially in the Supernova Scatter Feature, When you reach level 3 and all high-paying signs become scatter symbols and any wins made multiplied the pay table value of the symbol each by the number of times it appears on each reel.

Stars Awakening is available for handheld devices using iOS, Android or Winds as well as a recognised browser such as Firefox, Explorer, or Chrome.