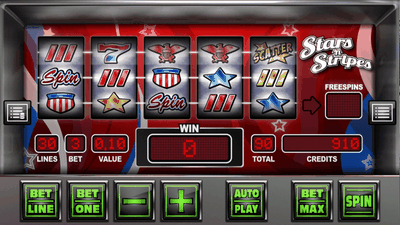 The Stars and Stripes Progressive Jackpot available at casinos sporting TopGame software is a huge jackpot that is tied to two pairs of very similar slot games. It is linked to a 3-reel, 3 pay line version of Red White Blue as well as to a 3-reel, 5 pay line version of the same game. Similarly, the Stars and Stripes Jackpot can also be won when playing the 3-reel, 3 pay line and 5-reel, 25 pay line versions of Sweet Surprise.
It’s no surprise that the two versions of Red, White and Blue have a very overtly American feel to them. To win the progressive jackpot in the 3 pay line version of Red, White and Blue, you must have striped and star-spangled sevens line up on the third row while wagering the maximum possible bet. The same applies to the sister version of the game, though in this version you obviously have more pay lines to potentially benefit from, but you must make a higher bet to begin with.

Sweet Surprise is a scrumptious, candy-themed game that employs icons such as chocolate cakes, cupcakes and doughnuts. In the three line version of the game, the progressive jackpot is won when you make the maximum possible bet of and have three chocolate cakes line up on pay line number 3. In the larger version of the game, you have to have 5 ladies’ man symbols come up on a pay line that is in play while having the maximum 5 on the table. The larger version of Sweet Surprise also features a bonus game.

While all that sounds nice, the reality is that we highly recommend that you steer clear of this jackpot. It is offered by TopGame, a company that earned for itself such a bad reputation that its owners recently decided to change its name. We’re talking things like running slots with missing wild symbols that made it impossible for players to win the top prize, not to mention the vast majority of its white label casino licensees being reviled for their slow-pay/no-pay modus operandi. A leopard doesn’t change its spots, so once again we advise against playing for this jackpot.