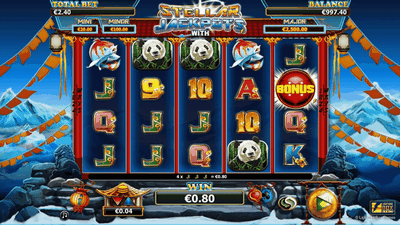 Going for the Stellar Prize

As you ascend up the Chinese mountains towards the praying shrine, you’ll come across some wonders. These exist in the form of the game’s special features and perks. To begin with, you can’t possibly have a game with the title of More Monkeys without actually providing any monkeys. Fortunately, the monkey in this slot (who is also a warrior of some kind) works as the wild icon. As such, he will substitute for all other symbols on the reels in order create winning combinations. The only exception to this rule is the addition of the scatter bonus. The monkey wild is only able to show up on reels two and four though.

As far as the scatter icon goes, this comes in the shape of the big red circle with the word, ‘BONUS’ written across it. Scatter symbols can appear anywhere across the reels and still reward you with a pay out. For example, if you manage to bring five into view, your stake will receive a 5,000 times multiplier! Additionally, whenever three or more scatter icons appear, you’ll get to access the freespins round of the game. Three, four or five scatters provide you with seven, 10 or 20 freespins respectively. During this feature round, an additional icon comes into play, which is the baby monkey. This one works as an extra wild, substituting for all others like the standard wild. Again, the only exception to this rule is the scatter icon, but this wild is able to appear on reels two, three and four. And furthermore, you can choose an additional perk to bring into play during freespins.

More Free Games. This gives you an extra eight freespins on top of the ones already received. More Stacked Wilds. Eight stacks of wild icons will show up on reel three during freespins. More Multipliers. Prizes that you win may receive a multiplier of up to times eight.

Now, you may be wondering how you’re able to win the progressive jackpot prizes. Well, the triggering of the Stellar Jackpots Bonus is actually random. It does not depend upon the size of the bet that you place, and the round consists of six challenge levels and a Jackpot level. For each challenge level, you need to choose one of the remaining icons in view. Each choice will reveal either a green upwards arrow or a red cross. The upwards arrow advances you to the next level, while the red cross loses you a life. Another choice may be made on the same level. If all six levels are completed successfully, you begin the Jackpot level. In this round, you need to choose spaceships to reveal Mini, Minor or Major. Match three of the same to win that corresponding jackpot amount!