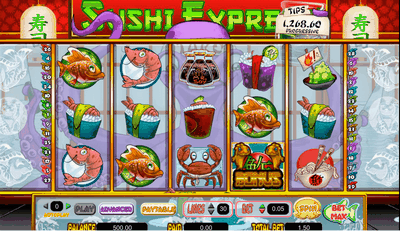 The Sushi Express mobile slot is an online casino game manufactured by Amaya. It is inspired by the far eastern cuisine, mostly by its seafood. It features 5 colorful rolls, 30 fixed paylines, and a progressive jackpot! Try it in the demo phase or for real money! This slot is similar to Captain Nemo.
Coins & Wager Size

Before spinning, you should determine the size of a stake.
Paylines are fixed and therefore cannot be manipulated.
The only thing you can change is the bet per line. It can be set from 0.
That makes the range of your total bet go from 0.
This pokie has a wide variety of wager choices and can be considered a medium volatility slot machine.

This game features a progressive jackpot which can be found in the top right corner at any time. It can be randomly awarded to any player at the end of the perk round. The average Return to Player (RTP) is 95. Any of the 30 lines work as adding the icons’ value together after they match them. After this is done, the payment is shown in the Balance section.

After adjusting the bet size, hit the spin button to start the reels. There is also an Autoplay option if you want the computer to spin it for you. There are advanced options regarding this feature. After the rolls stop spinning, you eventual prize will be shown in the “paid” panel, between your current balance and the size of your total wager.

Symbols to Know About

There are regular, wild, and scatter figures.

Regular – There are 9 colorful icons considered as the regular. The prize depends on the combination of these signs. However, they do not trigger any bonuses. They are represented mostly by different types of food. For example, Lobster, Sushi, Wasabi, Sashimi, and others. The ranking of these cards can be seen in the Paytable, appearing below the presented drums.
Wild – It is represented by the Octopus Chef who is the also the cover face of this game. You can see him behind the reels at all times. The Wild appears on all reels, and it substitutes for any other icon except the scatter. It also brings the 2 times greater prize than the best-ranked symbol.
Scatter – This card shows up only on reels 2, 3, and 4. When 3 such cards appear, a bonus feature is triggered. You can recognize it by the big “Bonus” sign on it.

In the first phase, a player picks fish pieces of a carrier. Your objective is to find prizes and/or free games. Once you find the Collect button, you should click on it, and the first stage stops. It will show the coin prize and the collected free turns. The second stage is a free spins feature. You get to play those free turns you earned in the first stage of the bonus. In this game, during each spin, all other symbols, except sushi and soy sauce, will fade away. Then you are to pick one of those two symbols. The chosen sushi or a soy sauce card will show how big is the reward you obtained.