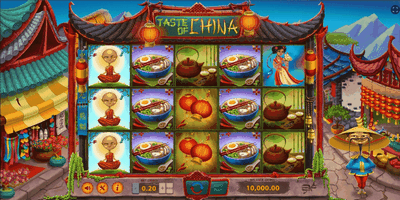 Taste of China, an online slot game created by BF Games, lives up to its name. Whether it’s the music, the Chinese city that sits in the background, the Chinese symbols on the slot reels, or the little man in a conical hat who celebrates each time you win, Taste of China gives you even more than just a “taste” of China.

This 5 reel, 20 payline game gives bettors plenty of leeway with their bets (as long as they are playing the game for money, not the demo game) though gives no leeway with the number of paylines. Taste of China offer players one of the best online slot experiences with Chinese culture, and the game doesn’t apologize for that at all.

I’ll give you three guesses as to what the theme is. China is clearly the theme of “Taste of China. And as I said earlier, it is nice to see a game not deceive you with its title. Taste of China informs you up front what it is before you even start playing. Players begin the game with 10,000 credits (at least in the demo game that is what you are given). The minimum bet is 20 (though once again, that is the only bet the demo game allows you to make). Players spin to try and match three in row of each of the symbols on 20 fixed paylines. I’ve mentioned several times already the limitations of the demo game version.

Taste of China limits betting on the demo version of the game. So a player who wants to test out the true volatility of the game before putting money on it will have to enter the game blindly. For argument’s sake, most reviews give Taste of China a 98% RTP rate with medium variance.

Players also have access to gamble mode after every win. Players choose the red or the black stone with the chance to either double up or lose everything they’ve won with the spin in question. And while Taste of China does have an unlimited auto spin mode, be warned you cannot play gamble mode if your game is set to autospin.

There are nine symbols in Taste of China. The tea kettle, the moon, the rice bowl, and the dragon all have the same payouts. The next four symbols, listed in order from smallest to largest payouts, are the Chinese girl, the floating lamps, the monk, and the Chinese house. The ninth symbol is the goldfish: a scatter symbol that produces free spins.

Players receive 12 free spins for every three gold fish that pop up on the reels. And Taste of China features a plethora of super symbols. Super symbols cover 2×2 or 3×3 of the reel spaces on the board. Most every spin that produces super symbols is guaranteed a big win. Players can expect to win frequently while playing Taste of China. But once again, that is based on the demo mode. Will players win with the same frequency once higher betting is made available to them?

Review of Taste of China

Slot players who love Chinese culture will love Taste of China. The scene is set early and maintained throughout as players compete for multiple winnings in BF Gaming’s 5 reel slot. My only concern is with the lack of access to the real game. The game played online in demo mode keeps you from having the full controls you will have while playing for money.

So keep that in mind (or maybe check out reviews of those who’ve played the money version) when considering playing the real thing. Find as much info as you can to determine if demo mode payouts line up with payouts for money.