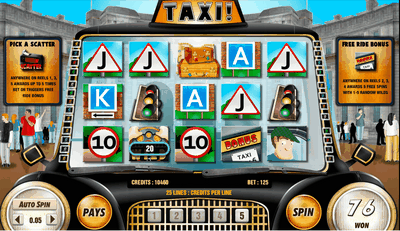 NextGen Gaming are a tidy little slots developer who churn out some nice games with varied themes and they know how to do the comedy angle too.
If You Love NextGen.

If you’ve played their quirky magic-themed slot, Potion Commotion, or enjoyed the saucy postcard-style comedy thrills of Doctor Love on Vacation, you’ll probably have a feel for NextGen’s M.

Certainly joining that latter camp is Taxi, a new(ish) game based on the hectic life of a London cabbie as he ferries passengers around the British capital at an average of 3 mph as they inform passengers of the historical sites of London that they pass on the journey.

What’s nice about the game at first glance is how the reels are housed: the 4 row, 5 reel and 25 pay-line play area is housed by the windscreen of the taxi, with the iconic black cab headlights containing the AutoSpin and Amount Won figures. The car’s indicator lights, meanwhile, are the Paytable and Spin buttons.

The cartoonish graphics are sweet, with a set of traffic lights, a taxi number, the cabbie himself, a customer, suitcases, and 10-to-Ace poker symbols made out to look like road signs. The top payer is the Wild dashboard symbol. Five across the reels pays out a 6,250-coin max.

There’s more bonus cash to be had in the base game. After a winning spin you will receive a random multiplier on your winnings of between 2x and 5x. There are two bonus Scatters to hunt out. First, the cabbie’s meter triggers an Instant Win or entry into the ‘Free Ride’ bonus when you land three of the icons anywhere on reels 1, 3 and 5. Most of the time it’s a straight Click Me instant cash win, but occasionally a symbol will reveal entry to the special round.

That Free Ride bonus is more conventionally triggered by landing three Bonus Scatters on reels 2, 3 and 4. Five spins are awarded with between and one and five bonus Wilds added at random.

Taxi slot is a neat little slot with some nice touches. If you hit two Bonus icons on reels 2 and 3, the fourth and fifth reels speed up for added drama. And while this is common in most online slots, what is less common is when you hit two meter Scatters on reels 1 and 3. The fifth reel then slows right down to a crawl, agonizingly coming to a stop like a roulette wheel. It’s nice to see that third Scatter come to a gentle stop on reel 5 to trigger the bonus wins. All in all, a recommended slot.