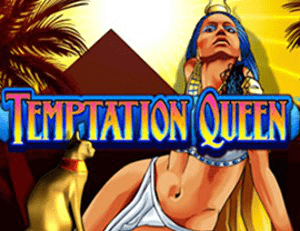 Queen Nefertiti was one of the most mysterious and powerful women in Ancient Egypt, and it’s obvious to anyone with an interest in this historical period that WMS have based the Temptation Queen online slot on her, but will you resist the temptation of her ample curves or give in to her for the opportunity of claiming her vast treasure trove of riches?
Varying Stakes but Stock Sounds

Set deep in the heart of an Ancient Pyramid with hieroglyphics etched deep into the walls, Temptation Queen consists of 5 reels and 30 paylines. The Temptation Queen slot enables players to play slots for real money from as little as 30p per spin, while for the richer amongst you a maximum of £150 per spin is available – plus it boasts a generous 95.

The sounds don’t lend themselves to the Egyptian theme which detracts from the experience, and if you were spinning the reels with your eyes closed you’d have no idea what the theme was from the sounds that have been used by WMS , which is a great shame as they are usually renowned for developing slots with great graphics and unique sounds.

While you may have assumed the Queen would be the Wild symbol in Temptation Queen, instead it is actually a stunning Pyramid with the bright sunset of Egypt protruding from behind it and the word WILD in gold printed across it.

The Wild symbol can only appear on the second, third and fourth reels rather than all five but every time it lands and forms part of a winning combination it sees the symbol expand to cover the whole reel. This results in additional winning combinations for an even greater win, and rather than being restricted to the base game, Wilds also expand in the same way during the free spins mode.

The Queen is Most Valuable of All

Many of the same symbols that featured in the Egyptian Riches slot machine feature here, but that shouldn’t come as any surprise as the same symbols are constantly popping up in Egyptian-themed slots, of which there are many!

In addition to the Wild that has been explained above there is the stunning Temptation Queen casino app herself who is the highest valued of all, the Great Sphinx, Falcon, Ankh, Scarab, plus the lowest valued Ace, King and Queen playing card symbols.

Free Spins Fit for A Queen

While fellow WMS slot Egyptian Riches did not feature a free spins mode, it’s a welcome inclusion in the Temptation Queen slot machine, but before you spin the reels for free you’ll need to land three or more of the Golden Cat Scatter symbols on consecutive reels beginning with the first. What is interesting here as compared to most online slot machines is that the Wild can actually substitute for the Scatter to make it easier to trigger – something which was much needed in my opinion.

Personally I found it to be a rather tricky combination to land on the reels but once you do a message splashes across the screen stating that you have won 8 free spins and you and then have to push the ‘click to start feature’ button to begin them – meaning you can pop out to boil the kettle before revelling in excitement at your free spin wins!

Once you have played your final free spin gold coins starting splashing out from the bottom of the reels and your total win is displayed with the funds added to your balance.

Granted, it has expanding wilds and a free spins mode which weren’t featured in the Egyptian Riches slot machine, but when compared to the other options available you should resist temptation and avoid the Temptation Queen casino slots altogether.

The Cleopatra slot machine from IGT (which is one of the best Ancient Egypt slots around and is now linked to their MegaJackpots progressive) or even the Rome & Egypt slot machine from WMS (which combines Ancient Rome and Egypt together for an incredible experience) are both much more exciting online slot machines with features to make it even more worthwhile!