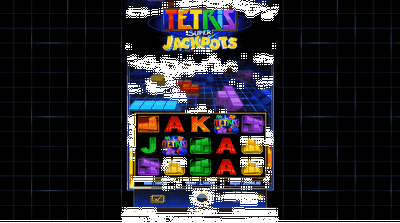 Tetris Tetris Super Jackpots slot another designed primarily for mobile devices and like other games of this ilk has an elongated reel set in a vertical pattern, like Blueprint’s Pegasus Rising and Bally’s Triple Cash Wheel. The theme is obviously the block game of the same name using 4-segment polyominoes that interlock, originally supplied by its Russian inventor for Commodore 64 computers back in the 1980’s! As such the graphics and animations aren’t far ahead of that period with basic sounds too under a blanket of synthesized music. The Tetris puzzle was renowned for being fiendishly difficult when it appeared – can we hope it won’t be as hard to increase our bankroll?
The game has 5 reels of 3 rows, well most of the time as we’ll discover! There are 243-ways to win so no pay lines here and the symbols are five different colours of single blocks and card values. The light blue blocks pay 3x your 100-coin bet for a full way of 5 across all reels, purple, green, yellow and orange pay 1x and finally the four card values pay a mere 0.
Tetris blocks

On the grid pattern above the reels are 7 different ‘Tetriminos’ (Tetris blocks) in various hapes, i. L’ etc. On any spin one or two of these Tetriminos may descend and land inside or partly inside the grid. This then increases the ways available up from 243 if not contained within the grid fully. The idea is a higher chance of winning by lining up the matching colour blocks on the reels when they stop.

Three game logos on the centre 3 reels triggers the bonus here. The reels expand fully to 8-rows high and any win will create a Tetrimino ‘watermark’ behind the reels, it can be any of the seven possible Tetriminos. This will fall to the bottom of the reels and any subsequent ones will stay on top of the first if it impedes their progress to the bottom. Once a a row is covered by any combination of watermarks it clears and pays 20x bet and the higher ones will cascade down. The games are unlimited but will end when a full watermark descends and pokes through the top of the reels array. Good fun to watch, hard to win big on!

There are also 3 internal jackpots of 50, 250 and 2,500x bet. The pick for these will be triggered if a Golden watermark appears behind the reels during the free spins. If it eventually becomes part of a cleared row the jackpot game begins, for the Mini, Minor and Major.

Tetris Tetris Super Jackpots slot initially great to watch and certainly catches the eye and imagination, but rapidly becomes repetitive and tiresome, with the feature hard to trigger despite the usually poor returns. The RTP is reasonable at 95. WMS could have made this trademark into a much better game mechanic if the truth be told, and the pays more generous in the base game. The game Tetris may have been a product of the 1980’s, but I think I’d rather dust the old Commodore 64 off than play this slot version again.