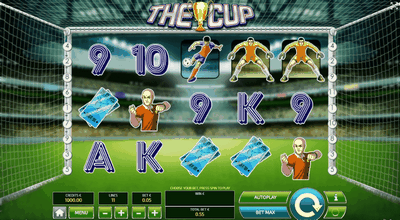 The Egyptian theme for online slots has been used a lot in the industry. Rival Gaming ‘s Wishing Cup game is another in this particular sub-genre, and it focuses primarily on the tomb and mythology aspects of the culture. The graphics are about average, though the symbols have been stylized in a pretty good way, but the gameplay isn’t bad at all. It’s not going to win any awards for innovation, but it does exactly what it sets out to do, and that’s to provide players with an adequate slot experience.
Format and Layout

There are a total of 25 paylines in this game, and it has the usual layout of five reels and three rows. You can change the number of paylines per spin if you really want to, but we really recommend that you don’t since it will affect the RTP. Instead, lower the coin size if you want a smaller bet size, or you can choose fewer coins per spin since you can bet up to 10 per line for a total of 250 coins. Coin sizes themselves start at .

The cup from the name of the slot is the wild symbol, and it shows up on the first four reels only. Whenever this symbol lands on the reels, it expands upward to cover all of the symbols directly above it, but it does not expand downward like many other expanding wilds in other games. There are no particular winning combinations for the cup wild symbol, and it does not substitute for the scatter symbols (though it doesn’t eliminate scatter symbols that it covers up from counting for payouts).

There’s a pretty straightforward free spins feature available in this game. Get three of the sarcophagus symbol or more to trigger a free spins bonus round. Three of them earn seven free spins while four will get you 10 free turns. Five of the sarcophagus picks up a cool 15 free spins. During this feature, the middle reel is always completely wild. This adds a bit of value to these free turns and makes it easier to hit more winning combos than you would have during the normal spins.

The secret passages can open up since you’re inside of King Tut’s tomb as the setting of the game. This gives you an opportunity to his miscellaneous instant payouts. This basically just gives you wins that you wouldn’t have gotten otherwise, and it’s a cool way to add value to the experience in a way that fits with the overall theme.

The top-paying symbols are all scatters. Five of king tut gets 2,000x, and five of the wolf pays 1,500x. You can earn 750x for five of the bird symbol. It’s critical to note that these symbols do not count with a wild, and they are all scattered. This means you can get these pays for lining them up anywhere on the reels, which adds a dramatic amount of value while changing up the gameplay quite a bit.

The lower pays are made up by the card ranking symbols. Five of the A gives you 125x, and it’s 100x for five of the K symbol. You can also earn 75x for five of either of the Q or J symbols, and five of the 10 or 9 pay out 65x. These are some pretty reasonable payouts overall, and it’s important to note that the card rank symbols are stylized in a way that really matches up with the graphical motif of the game. This keeps them from sticking out like a sore thumb like what you’ll often find with many other games.

The Wishing Cup slot is yet another in the line of dozens using an Egyptian theme. Rival Gaming has tried to do a good job of getting out from the standard cliches of this sub-genre, and they’ve done a fairly good job of that. The multiple paying scatters as the high symbols in the game combined with the half-expanding wilds creates a different kind of gameplay than most players will have experienced before. Even though the graphics leave a bit to be desired, it’s the gameplay that they have really focused on here, and in that, this game is a success.