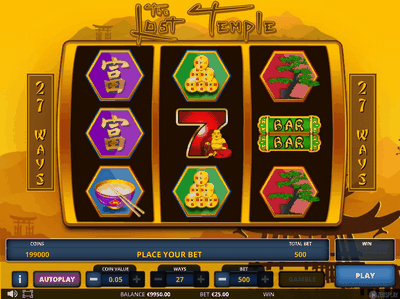 Lost civilisations hold an air of mystery, of once great societies buried by time. Lost Temple slots from Amaya Interactive plays on this idea as the backdrop to this standard 5 reel slot, putting players on the trail of the Lost Temple and the treasures it holds. A common theme for slots games, Lost Temple has its own unique spin on uncovering hidden treasures, felt instantly from the moment you enter the game.
Aside from the beautifully drawn graphics and the ominous soundtrack, this is a game with 1,024 ways to win and a payout percentage of 97. RTP rates available in any slots game of this ilk. There are no paylines in the traditional sense. Instead, payment is made on the basis of neighbouring matching symbols and matching clusters of symbols, delivering an increased number of potential paying spin combinations.

You can get involved from as little as £0. With the maximum jackpot set at a generous 2000x the wager, there is scope for significant wins when the reels are on your side.

The game is comprised of a number of ancient jungle-themed symbols, with vines wrapping around the high card symbols. Aside from the other paying symbols, there are two particular feature symbols of note – the wild, and the scatter respectively. The wild symbol is a girl – she looks pretty modern, so we’re not sure exactly how this ties in with the theme, but it’s a useful symbol nevertheless. You’ll be able to complete any outstanding paylines whenever she appears, substituting whatever is missing (except an additional scatter) for her wild symbol.

The scatter symbol is the ancient temple symbol, emblazoned with the word ‘bonus’ – there’s no doubting this symbol when you see it. Two or more of these temples, anywhere on your reels, trigger the bonus game feature, as well as paying out their own scatter bonus.

When you land multiple scatters across the reels, those particular reels are locked down. The remaining reels are spun three more times to see if you can get a total lockdown on the reels – i. If you’re lucky enough to get a full sweep, you can then reach the Temple Bonus feature – the same result as if you landed five scatters on your reels on any given spin.

The Temple Steps sees you moving up from one level to the next, progressing towards the top of the Aztec temple. Choosing green means you move up a step, red ends your game. The higher up the temple you go, the more free spins and the higher value the multipliers that will be added to your board.

This essentially increases the value of any wins from your subsequent spins, to a greater or lesser extent depending on your progress in the bonus round.

The 97. Overall, this is a slots game that’s fun enough to play, but at its most enjoyable when it pays – isn’t that always the case!

Lost Temple slots is a classic slots game, with a classic theme that any casual slots player will find engaging. There aren’t too many added features or mini-games to speak of, but the 1,024 paylines and the generous in-game bonus feature more than makes up for it. Take yourself to a lost South American world today, with a spin or two on Lost Temple slots – available here at PartyCasino.